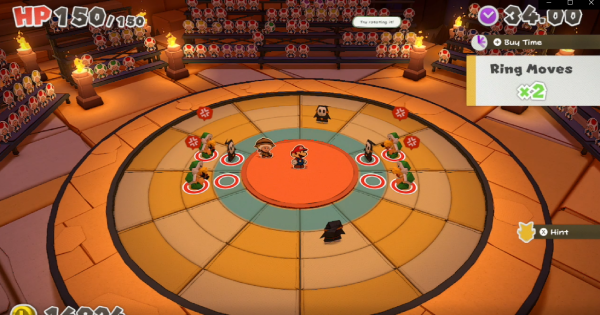 Origami King features three primary ways of fighting enemies. The first two methods are by far the most common and are turn-based, while the last one is rarer and is in real-time. Read up on each system below!

Paper Mario: The Origami King's main type of combat features a ring. Here, you will spin enemies around to group them together and attack them.

Line Up & Group Up Enemies

Battles will take place on a grid with 4 concentric circles and 12 panels with 4 tiles on them. Your two main available movements will be:

By performing variations of these two movements you'll have to solve the various puzzles presented to you.

Line Up To Get Bonuses

The central premise of Origami King's battle system is to maximize damage by lining up enemies. Lining them up will provide a 1.5x bonus, which will help you finish the battles faster. You'll want to line up enemies in either 1x4 or 2x2 formations.

Generally speaking, all of your battles will have a time and turn limit. The time limit differs from battle to battle, but will usually be from 20-30 seconds. You will have one to three movements of the ring available to you. Also, depending on the amount of enemies you will also be able to attack more than once.

Origami King's battle system does not feature experience points, so the main reward and incentive for battling is coins! You'll get more coins the better you perform in battles!

Check Out The Coin Guide For Details Here

By performing well in battles, you'll be able to obtain more coins. Solving the puzzle (IE, not making mistakes), taking 0 damage, and engaging in multi-wave fights will all give you a sizeable boost to coin intake.

Make A Path To The Boss

Boss battles have a different mode of play than regular battles. Instead of spinning the board to group enemies together, you'll need to create a path for Mario to attack the boss! As such, you'll need to step on directional arrows to guide Mario your desired location.

During boss battles, the floor will be covered in various panels that will have specific effects if you step on them!

Bosses will frequently place obstructions or traps onto the board. Stepping onto these could cause you to lose your turn, take damage, or both! It's necessary to plan around these.

The final type of battles available in the game are somewhat of an outlier, as they are actually real-time. Mario will wield his hammer and be forced to maneuver around a large paper mache enemy, trying to hit it from behind.

This is standard action gameplay and does not feature the ring/grid whatsoever. This will be employed sparingly throughout the game, but it is important to practice and get used to. One place it is used is in the Scuffle Island Brawl Arena.

Depending on the weapon you use, Mario's attacks will change. Your two main ways of dealing damage will be the Hammer and Boots, though you will also have access to an arsenal of items as well.

The weapon or item you select with your Action will dictate the type of attack you perform. It's possible to use different attacks for different actions, meaning you can use a Hammer and then Boots after!

Weapons Break After Use

With the exception of the basic Hammer and Boots, all weapons you use in battle will eventually break, making you unable to use them anymore. This means you'll have to keep item durability in mind as you play.

Ask Toads To Cheer You On!

Select "Cheer" when you are lining up enemies. Pay coins to the toads and get support from them - they'll give you helpful items and also give you advice on how to line up enemies! They might even do damage to enemies. During boss battles, Toads will indicate Mario's path toward the boss.

Check Out All Toad Locations Here

Partners will also contribute to your efforts in battle. They will all have different attacks, some single-target, others AoE. You may also find that some Partners slack off and don't contribute. In general,l we recommend not relying on your partner to successfully win battles!

Check Out All Partners & How To Get Them Here

Practice In The Battle Lab

If you're not too familiar with the battle system, head to the Battle Lab in Toad Town! You'll be able to practice using the hammer, boots, guarding, and more here!