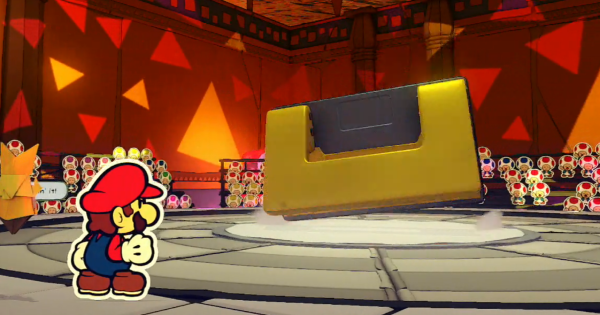 Check out this all boss list & guide for Paper Mario: The Origami King. This includes how to beat bosses, battle, how to win, and Paper Mario bosses.

To beat the Earth Vellumental Boss, you'll need to take out its tail and flip it over! At this point you can beat away at it with your 1000 Fold Arms!

The Colored Pencils use a special move called Rainbow Roll which shoots out pencil missiles at Mario. Pressing the guard button in time will let you block the attacks! By closing the lid, you can cause the Colored Pencils to shoot themselves.

▲Get behind the boss & close the lid!

The Water Vellumental will store up water and unleash it in a huge attack that will cover the whole arena. You will need to know when to attack and defend against this boss!

Rubber Band inflicts serious pain with a snap! It may resemble a human, but it's all made from Rubber Bands.

The great squid Gooper Blooper, who has appeared in several previous games in the franchise, makes a return in Origami King.

The Tape can take Mario in its sticky grip and slam him into the ground with ease! This boss can be found in Sea Tower, the final area of the Purple streamer.

The Sumo Bros are a group of lightning-wielding, cloud-riding sumo wrestlers who get in Mario's way in the Green Streamer section. You'll have to take these guys out before entering Bowser's Castle!

You will be facing this boss just before you enter the throne room of Bowser's Castle. Key is to use hammer from 1 panel far from the boss.

Watch out for its sharp dual blades! It can take you out in one hit. Dodge the deadly attack by jumping timely.

The Stapler pins down Mario and binds you. This boss is the last stationery boss you face off before the last battle with King Olly.

The last boss of the Origami King will be King Olly. There are 3 consecutive battles so read the guide below to learn how to beat all of them!

Boss battles differ substantially from regular battles. Instead of using the ring to match enemies, you'll need to use it to create a specific path towards the boss.

Check Out the Battle System Guide

The boss will be at the middle of the arena, requiring you to create a path for Mario towards it. Spin and slide the rings to get Mario close enough to attack the boss.

Every boss has a weak point that you can use to deal extra damage to it. These can even cause the boss to deal damage to itself.

Summon Bosses After Beating Them

In Japanese promotional material, we saw that Olivia is actually able to transform into the Earth Vellumental boss! She seems to do this in order to solve certain puzzles in the overworld. It seems all Vellumental bosses will become summons/abilities, but the same might not be true for the stationery bosses.