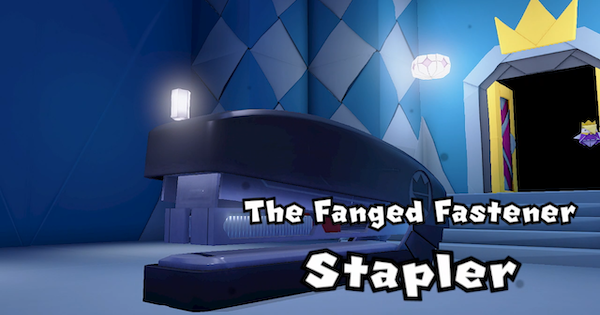 Check out this Paper Mario: The Origami King guide on how to beat Stapler boss! Includes tips, best ring path, how to solve puzzle, ring examples, and more!

Stapler is the last Stationery Boss you face right before the last battle with King Olly. Poor Bowser has been folded by this Stapler boss.

Attack When It Reloads

When Stapler runs out of staples, it will open its mouth and start reloading. Attack while its reloading to deal lot of damage. You can make Stapler spit out staples by attacking with the boots or 1000-Fold Arms.

Attacking with a hammer will take out only 1 staple, whereas a jump attack will waste 4 staples! Use the hammer only when it opens its mouth for reloading.

Staple uses Dog Tag to pin you down when you are close to it and uses Staple Gun when you are far away. The Staple Gun consumes more staples so standing far from the boss is one possible strategy you could use to make it reload faster.

The color of the boss's staples change from silver, to red, to gold as the battle progress. The fancier the staple, the higher the attack.