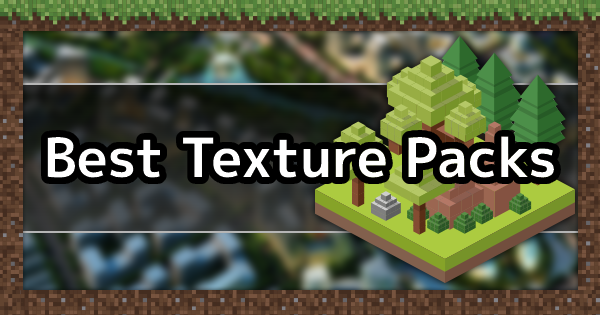 Textures packs can change how Minecraft looks! Get to know best texture packs for Minecraft 2021 with this list! Know contents, info, 1.17 compatibility, & details on these texture resource packs!

What Are Texture Packs?

Change The Look Of Blocks

In Minecraft, texture packs are mods that alter the game's blocks and entities. They can either improve or uniquely change the visuals of the game. Not only do these texture packs alter the look of blocks, they also affect the looks of the water, animals, and sometimes even enemies and villagers.

Easy To Apply & Use

Texture Packs are relatively easy to apply. Just download them and move them to Minecraft's "resourcepack" folder to use them. You can change textures via the Options menu even while in-game.

Shaders completely overhauls the graphics of Minecraft. They require other mods like Optifine and can be used together with texture packs. Note that some texture packs have improved visuals when combined with these mods.

Not Arranged By Rank

The best texture packs listed below are not listed by rank. Players can check each one out and see which one suits them best. Also, textures written below have been recently updated, making them highly compatible with recent patches.

Realistico is a texture pack that tries to bring realistic textures to Minecraft. By default, the Lite version is 128x128, making it far more detailed than the standard 16x16 texture.

Faithful x32 aims to be as "faithful" to the original Minecraft look while improving its overall visual appeal. This texture pack is twice the texture size of vanilla Minecraft. This makes Minecraft look a little it finer and a bit more detailed.

F8thful is another texture pack that keeps Minecrafts general aesthetics but adds a bit of uniqueness to it. It replaces most blocks with 8x8 textures, less than the 16x16 of vanilla Minecraft. This gives the game world a blockier and simpler look.

If you want to make Minecraft look smooth and cartoonish, the 8x8 Rodrigo's Pack is something you should consider. This texture pack might have a smaller 8x8 texture but it does its job well in giving Minecraft a colorful and animiated feel.

Immersion is a 32x32 texture pack that upscales vanilla Minecraft with more detailed and cleaner textures. It is not a complete overhaul and it maintains a semblance of the blocky aesthetics of Minecraft while making it look a bit nicer.

Bloom is a 32x32 texture pack that upscales and somewhat intensifies the colors of certain blocks. This texture pack is recommended for those that want a brighter and "livelier" Minecraft aesthetic.

Soartex Fanver Vanilla is a 64x64 texture pack that smoothens blocks while also introducing clearer features. This texture pack is unbelievably light, and is usable even by computers with modest hardware.

Firewolf is a 128x128 texture pack that introduces sharper and smoother blocks to Minecraft. It plays somewhere between realism and vanilla Minecraft. If you fancy smooth and plain blocks, this texture pack is for you.

Wanderlust is a 32x32 texture pack that replaces textures with a cleaner and more detailed look. As it only doubles the default 16x16 resolution of Minecraft, it is relatively easy to run even on low-end computers.

LB Photo Realism Reload is a 128x128 texture pack that adds more detail and depth to most blocks. Despite being significantly larger than the default 16x16 textures, LBPR Reload does not require a high-end PC to run.

Bare Bones is a 16x16 texture pack that introduces simple clear cut blocks. These blocks are a bit brighter and are somewhat less detailed, making them perfect for players that like a cleaner Minecraft. It is also very light, making it very suitable for low-end systems.

The CreatorPack is a 32x32 texture pack modifies most blocks in Minecraft. It makes the blocks a bit more detailed and cleaner without requiring much power from your system.

Invictus is a 64x64 texture pack that comes with light and simple modifications. It introduces detailed textures that do not significantly alter the aesthetic of Minecraft.

Despite being a 128x128 texture pack, Vanilla PBR introduces only minor changes to the base Minecraft visuals. It's incredibly light given its size, making it perfect for players that want a bit more detail without sacrificing much of the original Minecraft appearance.

Compliance 64x is a texture pack made by multiple users and carefully curated to maintain a vanilla theme. It is 4 times that of Minecraft's default 16x16, and is highly detailed without drastically changing any block.

Unity is a texture pack that aims to update Minecraft's slightly outdated default texture. It still uses the original 16x16, just updated with cooler colors and textures. This is perfect for users that want better textures for their low-end systems.

See Through The Ground

Xray Ultimate is a texture pack that practically allows you to see through blocks. Not only that but it also highlights valuables ores for you to mine. As it is a texture pack, you can simply have it loaded with either vanilla or modded Minecraft, making it easy to turn on and off.

Clarity is a 32x32 texture pack that changes most of the textures of blocks in Minecraft. If you are after a darker and more realistic Minecraft, then try out this one. Also note that it changes a lot even without shaders so playing it with one can significantly enhance Minecraft's graphics.

NAPP (Not Another Photorealistic Pack) is a 512x512 texture pack that changes blocks to appear more realistic but with a bit of stylistic flair. However, to fully maximize NAPP's highly detailed textures, you need to install Optifine first together with a shader like BSL Shaders.

Transparent GUI and HUD Ultimate, as the resource pack title implies, is a mod that makes all HUDs and GUIs transparent. This does not overhaul other textures like blocks and models. Users that prefer seeing what's behind the UI should consider trying this texture pack.

toby plowy (Epic Adventures) is a 32x32 texture pack that increases the details of textures without introducing a significant change to the game's color palette. Also note that it changes a lot even without shaders so playing it with one can significantly enhance Minecraft's graphics.

Mythic is a 32x32 texture pack that mostly changes textures to resemble that of a dark medieval fantasy RPG. It comes with very well-made textures and can be used with shaders for better immersion. For players looking for a texture pack. for their fantasy quests or horror mods, we highly recommend this one.