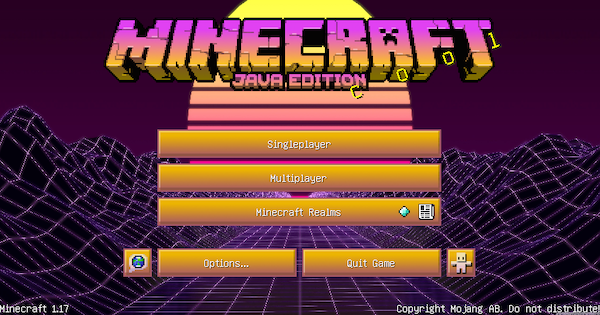 Synthwave Themed Texture Pack is a 16x16 texture pack that changes Minecraft's default UI to that of an 80's purple/yellow aesthetic. It also changes some textures like the sun. This UI is perfect for mods that have a futuristic vibe or theme.

Aside from changing your UI, this texture pack also introduces a cool Synthwave background music. The music can be heard in menus and while playing the game. You can also opt to download a UI-only texture pack if you have other mods for music.

Synthwave Themed Texture Pack has been updated to the newest Minecraft version 1.17. Players can simply download it and load it without any issues or problems about compatibility.

While old texture packs can be used for new ones, older packs are likely to not have any compatible textures for new blocks. Check the latest version of the texture pack that you want to download for a better and more up to date improvements.

Does Not Need Other Mods

Installing Synthwave Themed Texture Pack does not require any additional mods. Texture packs work well even with the vanilla version of Minecraft. However, you can usualy also enjoy these textures if you want to with mods but note that there may be compatibility issues.

How To Install Mods Guide

:h34:One Of The Darkest UIs

Dark UI 32x is a 32x32 texture pack that darkens Minecraft's UI, making it easy on the eyes when playing at night. This is a UI you should consider if you want a "Dark Mode" version of Minecraft. It can also work with mods that are horror themed just for the added atmosphere.