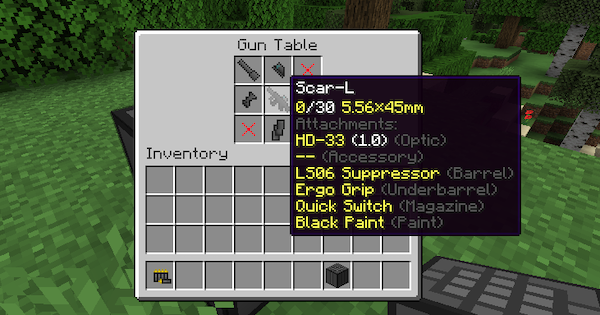 Check out this guide on the weapon mod Gun Customization: Infinity mod in Minecraft 2021! Know details, how to install and play, and Minecraft version compatibility!

Gun Customization: Infinity introduces guns and attachments to Minecraft. Attachments can be crafted and combined with the weapons to tweak and modify their behavior. You can also add color to your weapon, adding more uniqueness to it.

This mod also introduces aim-down sights to Minecraft, allowing you to carefully land precise shots on enemies from afar. Scope magnification varies depending on the type of scope.

The Gun Customization: Infinity mod does not require any other mods to run. Once you have the proper version of Forge running, simply place it inside your mod folder and you're good to go.

How To Install Gun Customization: Infinity

The Gun Customization: Infinity mod does not require on other mods except Forge to run properly. Simply drop it inside your mod folder and run Minecraft to play it.