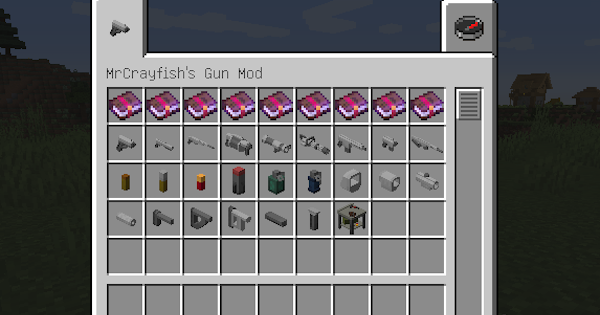 MrCrayfish's Gun Mod requires only 2 files: the mod itself and Obfuscate. Once you install Forge, you need to have both of the same files inside your mod directory to run MrCrayfish's Gun Mod. Remember to check the version compatibility between the 2 mods to ensure proper execution.

As of version 1.00, MrCrayfish's Gun Mod has introduced several new enchantments that you can use on your guns. These can enchantments are also compatible with Supports Enchantment Decriptions mod.

How To Enchant Items Guide

MrCrayfish's Gun Mod's guns, attachments, and ammunition all require a Workbench to craft. You can make a Workbench using the materials written below:

How To Reload In MrCrayfish Gun Mod

Only In Survival Mode

The default key to reload your weapon in MrCrayfish's Gun Mod is "R". Note that you can only do this if you have ammo in your inventory and only in Survival Mode. Guns have unlimited ammo in Creative Mode. Also, note that some versions of MrCrayfish's Gun Mod have a bug that prevents reloading.

How To Install MrCrayfish's Gun

In order for MrCrayfish's Gun Mod to run properly, you need to also have the Obfuscate mod inside the mod directory. Note that you need to make sure that both mods' compatible Minecraft version are the same.