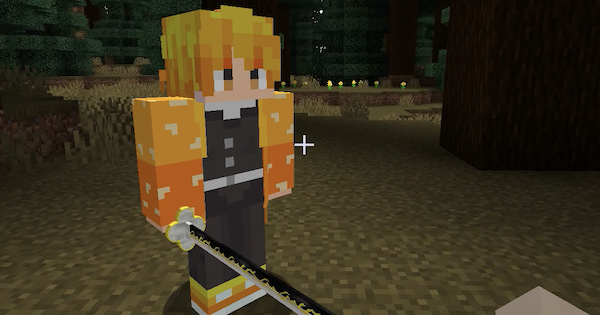 Check out this guide about the weapon mod Demon Slayer (Kimetsu no Yaiba) in Minecraft 2021! Know details, how to install, recipes, maps, controls, & Minecraft version 1.17 compatibility!!!

Demon Slayer is a mod based on the famous "Kimetsu no Yaiba" manga and anime. It introduces several elements of the story to Minecraft, allowing players to relive and experience the conflicts and fights in spectacular fashion.

Although a mod, Demon Slayer goes all the way as it adds a lot of content. It includes a branching questline, new weapons, skins, and character models based on the show. Demon Slayer also has new effects for the "breathing" moves showcased in the anime and manga.

In order to progress and get the mod's contents, the player must visit several new places. These locations are spawned once the player starts a new world with the mod. These 3 locations are usually next to each other.

How To Craft Nichirin Sword

How To Craft Tanjiro's Uniform

How To Craft Zenitsu's Uniform

Controls Can Be Changed

The controls listed below are the default settings for Minecraft. You can change them to your liking via the Options > Controls menu. Note that some key bindings may conflict with those of active mods so check first when you run Demon Slayer!

How To Install Demon Slayer

You do not need to install any other mod for you to be able to run this mod. Download the required Forge version and just place it together with the Demon Slayer inside your mod folder and you're good to go!

how do u use transparent world

how do you interact with the crows?