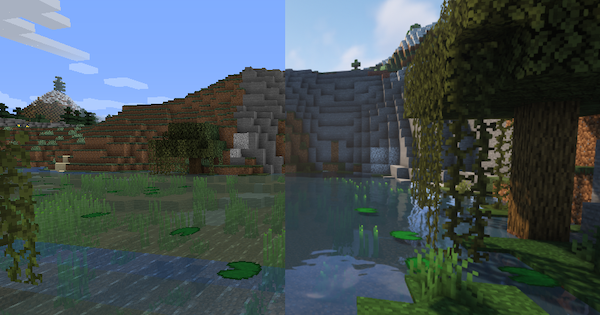 What Are Shader Packs

Shader Mods are "mods" that you can use to configure the how Minecraft appears. It allows users to customize the graphics of the game, changing the color, and brightness. Some shaders also modify in-game objects such as water, clouds, and trees!

Texture Packs replace the face of Minecraft blocks. When combined with shaders, both can drastically change the appearance of Minecraft.

As these mods will configure how the game looks, expect them to require higher system requirements. This may also cause some problems with systems that have modest hardware. Do check for compatibility first before applying them!

Optifine is an optimization mod that graphically overhauls the settings of Minecraft. It also supports the HD textures and effects, allowing modders to create their own graphical mods. All mods written below require Optifine to run smoothly.

Not Arranged By Rank

The mods listed below are not listed by rank. Players can check each one out and see which one suits them best. Also, mods written below have been recently updated, making them highly compatible with recent patches.

BSL Shader, But With More Options

BSL Shader is already great mod but when combined with LexShino Shaders, you get a more customizable mod.

Chocapic13' Shader is a shader mod that can push your system. Fortunately, the mod is available in 4 different settings, allowing users with modest hardware to run this shader.

Beyond Belief is a shader mod made in 2015. With new updates and tweaks, this classic shader can now be run on the latest versions of Minecraft.

Complementary Shaders is a shader mod made in 2015. With new updates and tweaks, this classic shader can now be run on the latest versions of Minecraft.

Vanilla Plus improves the graphics of Minecraft without adding in significant changes. It still manages to retain the blocky Minecraft look while adding in effects, shadows, movement, and lighting.

Oceano Shaders makes most of Minecraft's colors warmer, akin to a fantasy tropical island. Highly recommended for those looking to make their own seaside retreat.

Kappa Shader goes all-out when it comes to portraying Minecraft in the most realistic way possible. This, without drastically reducing the blocky appeal and looks of the game.

Aside from the usual lighting and shadow effects, Voyager Shaders shines with its realistic skies. Together with this, expect beautiful sunrises and sunsets.

Pushing the boundaries of Minecraft's graphics is one thing SEUS Shaders is known for. With this mod, players can enjoy superb visuals that emulate that of hardware-intensive games. However, you may need to have a powerful system to fully unlock its potential.

The shader lowers the contrast of Minecraft, making the game slightly darker, smoother, and somewhat mute. A major improvement done by this shader is that it improves snow, rain, and water to an almost unbelievable degree.

This shader does not require high specification computer for Minecraft. All effects that come with this shader can be tweaked and customized!

Tea Shaders gives a more vibrant coloring to the Vanilla Minecraft. It also alters the visual quality of water and vegetation.

Nostalgia Shader is a shader pack that can run on Optifine 1.12 or newer, and supports nVidia and AMD videocards. Also, this shader is compatible with two OS, Windows and Linux.

Potato Shaders And Its Efficiency

As the name implies, Potato Shader aims to stay playable with even a potato PC, one with low specs. However, note that Intel HD 5000 Graphics and older are NOT supported on Windows!

Exposa Unique shaders was designed to improve Minecraft's appearance without heavily taxing your system. It runs exceptionally well on most systems and can even be run by low-end computers.

Skylec Shaders And Its Efficiency

This shader changes the graphics quality of your Minecraft in many aspects. It adds more detail by tweaking the appearance of shadows, lightings, custom clouds, realistic water, and vivid color grading!

BQ Shaders is an edited shader from Chocapic13. With that said, it still gives a decent quality level even at the lowest possible preset. With the most recent update of this mod, the low preset looks almost the same as the extreme preset!

Windom Shaders is a shader pack that adds and improves the visuals of Minecraft. It has this film grain-like effect but is still enjoyable as it focuses on smooth performance.

Sunflawer Shaders is a modified version of the popular BSL Shader Pack that adds and improves the visuals of Minecraft. It brings with it customized visual features such as clouds, reflections, and shadows, while also including optimization tweaks. It is pretty light and can be run with low-end PCs.