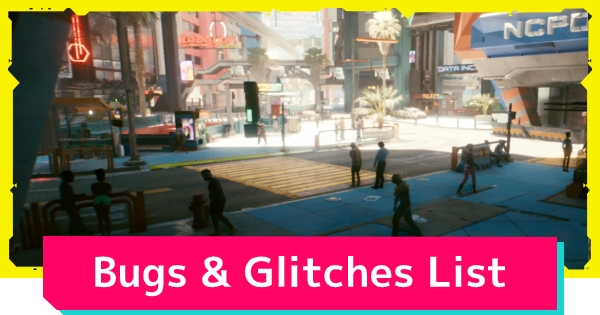 Check out this bug & glitch list in Cyberpunk 2077. Find out all sorts of different bugs and glitches on pc and ps4, bug fixes, workarounds, bug sharing forum, & bug reports!

A new patch has been released to fix multiple bugs and glitches in Cyberpunk 2077, The Patch 1.05 Update also contains platform-specific updates to address such concerns.

Check Out The Update 1.05 Patch Notes

Major updates will arrive on January & February to hammer out the rest of the bugs & glitches, and expected to be quite large. Though the monthly update will mostly concern bug & glitch fixes,

For PS4, XBOX One console players that are unsatisfactory with the game's performance, CD Project Red is offering a full refund up until Dec. 21. Affected players should contact the locations of their purchase or helpmerefund@cdprojectred.com if it's not possible.

Many Bugs Fixed In Recent Patch

Cyberpunk 2077 received a substantial patch on December 11th, filled with hotfixes to a lot of bugs and improperly functioning quests. Check out the full list in our article below for more information!

Check Out The 1.04 Patch Notes Here

Found Any Bugs? Let Us Know!

There are no doubt plenty of other bugs to report on in Cyberpunk 2077. If you find any other interesting bugs, leave us a ▼comment below detailing what glitch you saw and where! If you were able to solve it, let us know how too!

Barry Won't Speak To You (Side Job)

In the side job Happy Together, the character Barry will occasionally just refuse to talk to you. Even after waiting a rather long time, he still seems

Workaround: Save Before Talking To Him

To circumvent this issue, we recommend saving prior to talking with Barry. If you get the error, reload, wait a few moments and try talking to him again. That should fix the issue!

Check Out The Happy Together Side Job Here

In the Act 1 Main Job "The Heist", you'll eventually come to an elevator with an Arasaka Officer inside it. Some players have reported the officer to just constantly clip through the left elevator well when you approach him.

Workaround: Kill Him From Far Away

We were able to take this enemy out by keeping far away from him. If you get too close, he just disappears through the wall! Use a long range weapon and aim at his head - if you're fast enough he should die before he despawns.

Check Out The Heist Job Here

Can't Move After The Match With The Animals Champion

During the side job Beat On The Brat: Rancho Coronado, you face Rhino, the champion of The Animals. When you lose the battle with Rhino, you sometimes freeze and unable to move with your L-stick.

Workaround: Save Before The Battle

In order to fix this bug, you'll need to load the game again. Make sure you save your data before confronting Rhino.

Getting Stuck When Talking To Panam By The Campfire

During the side job With A Little Help From My Friends, you might get stuck while talking to Panam in front of the campfire. This is not technically a bug and you can proceed by moving your camera upward to look up to the stars. Since V and Panam is talking about stars, you'll need to gaze up to the sky to proceed.

Completing the mission can apparently sometimes result in nothing happening - some users are reporting that the next mission doesn't trigger for them. There is no known workaround to this issue as of yet.

Check Out The Search And Destroy Job Walkthrough Here

Complete the Gig "Guinea Pigs" sometimes results in the mission not actually giving you the rewards or registering that you've finished it.

Some players are reporting that there are moments while driving when you won't be able switch the perspective you're driving in. In our experience, this was remedied by just waiting a bit of time, but if this doesn't work for you, consider a reload.

One player reported inexplicably getting a huge amount of Johnny Silverhand's legendary iconic weapon, the Malorian Arms 3516. Unfortunately, as this is Legendary, it can't be destroyed or sold, taking up tons of inventory space. We are not aware of a solution to this.

A related bug, it seems crafting Iconic or Legenadry weapons won't let you disassemble or sell previous versions of it. This will permanently take up an inventory slot - there is no known solution to this issue. This appears to be the case for many (or all?) iconic/legendary items in the game. Be careful when crafting higher level versions of them.

In the main job The Heist, the taxi Delamaine is supposed to show up to bring you to the next area. For one player, the car just didn't show up.

During the main job Play It Safe, linking to a particular access port after defeating the boss Oda will result you getting a black screen. Players who have had this issue report that they've had no other choice but to completely restart the game. For the time being, refrain from linking into this port.

Some players report that starting the side job "Sinnerman" causes their characters to suddenly stop speaking. Apparently main characters won't speak, even during other story jobs. We strongly recommend either avoiding this side job temporarily, or saving before it starts and seeing the results.

One user is reporting that their vision is glitching out substantially, causing their screen to constantly be flashing red. This appears to have gotten worse over the course of the game. There is no known fix.

When i lvl up i dont get the attribute point

GIG: on the tight leash bug out I cant complete the quest

I died in a mission just as I got to a checkpoint and now it is literally respawn die respawn die, no matter what I try it's just not working for me

I've been stuck in a phone conversation with Mitch for the past few hrs. I've tried everything. Because of it I can't interact with anything else, I can't make or receive phone calls and I can't use my jumping ability.