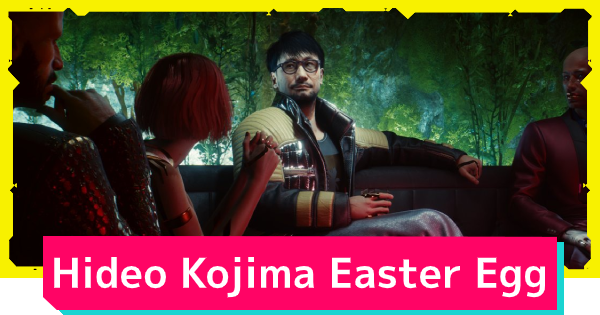 Where To Find Hideo Kojima

At The Arasaka Waterfront During "The Heist"

The legendary Hideo Kojima can be found chilling in a bar in the Arasaka Waterfront, a section of the Watson District. Mr. Kojima even voices himself - you'll be able to hear a variety of lines delivered by the man himself.

Easter Egg Can Be Missed

↑ When you finish speaking with the receptionist - stop and look around at the bar! Do not go in the Elevator.

You'll be visiting the Arasaka Waterfront (and Konpeki Plaza) in the Act 1 job called "The Heist". As far as we've been able to confirm, this is the only time you can see and interact with Mr. Kojima! If you want to see him, don't miss this opportunity!

In the world of Cyberpunk 2077, there is no Hideo Kojima. Instead, the character the famous game director plays is named "Hideyoshi Oshima" - all things considered, quite similar!

Conversation With Other NPCs

Conversation When You Try To Talk To Him

Who Is Hideo Kojima?

Hideo Kojima is a huge name in the gaming industry, being the series producer and creator of the Metal Gear Solid series, as well as the recent game Death Stranding. He's known for his work previously in Konami, and now in his own studio, Kojima Productions. He's also a huge movie buff.

One emblematic aspect of Kojima's games is their undeniable cinematic quality. He is well-versed in depicting frustration and sadness caused by massive organizations or an absurd world. At the same time though, he injects his works with powerful humor as well. His adept combination of all these elements makes for some really grand narratives that rival those seen on the big screen.

▲Norman Reedus in his role as the protagonist of Death Stranding

Most recently, Kojima enlisted the services of actor Norman Reedus (of Walking Dead fame). Featuring as the protagonist of Kojima's Death Stranding, Reedus' likeness was captured and used for great effect in the 2019 title.

The Most Followed Video Game Director

As of December 9th 2020, Hideo Kojima broke a Guinness World Record by His games are loved by a wide variety of people all around the world.

Game creator Hideo Kojima (@HIDEO_KOJIMA_EN) is now a record holder for:
Most followers on Twitter for a video game director

Most followers on Instagram for a video game director#DeathStranding#WorldStrandTour2019 pic.twitter.com/dywSzoNwlE