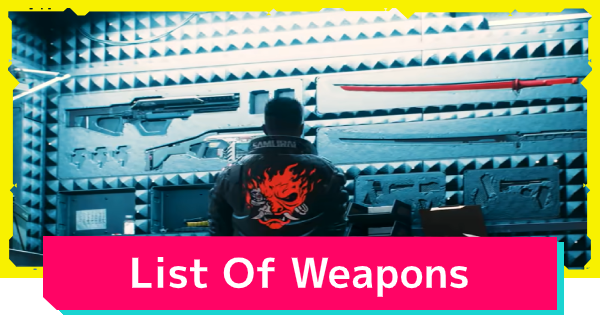 Read this Cyberpunk 2077 guide to learn more about the all weapons list! Find out about all weapon types, weapon manufacturers, stats, traits, effects, & more.

NOTE: This article is based on previews and trailers. This will be updated as soon as more information is confirmed!

Enhancements To Your Body

Cyberware weapons are usually enhancements made to your body. These cybernetic upgrades were designed to prioritize the user's stealth and may allow you to get the jump on any unsuspecting enemies!

Melee weapons are weapons that you need to use when getting up close and personal with your target. These weapons deal massive amounts of damage, but will require you to close the gap against the enemy

Spray Bullets And Hit Your Targets

Smart weapons utilize a smart targeting systems that cause the weapon's bullets to home in on their targets. You'll be able to deal damage to enemies that are hiding cover and obstacles!

Rain Down Destruction On The Enemy

Power weapons excel in the aspect that they're named after. Pure and raw firepower! These weapons will deal massive amounts of damage to enemies!

Technological advancements have given tech weapons to possess special traits which could turn the tide of battle in your favor! Each weapon may have unique traits such as shooting through concrete, firing lightning, and more!

Throwables are weapons that are thrown to deal damage to enemies. Most if not all of these weapons will have traits that affect an area, perfect for controlling crowds of enemies during fights!

Cyberpunk 2077 features a ton of weapons which you can use to dispatch your enemies. Whether you like to go in guns blazing or choose a more stealthy approach, there is a weapon that is made just for you!

Each weapon type will have specific traits! Some will home in on targets, while others can deal massive amounts of damage! Consider the types of enemies you'll be facing during the mission and adjust your loadout accordingly!

Customize Weapons To Your Liking

Weapons can also be customized to increase their ease of use! Some attachments may even increase the weapon's stats. Make sure to customize your weapons often to keep them in their best shape!