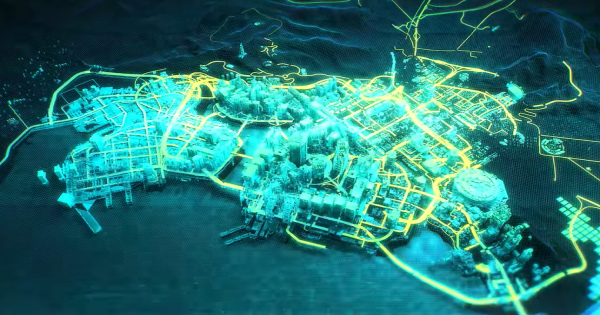 Read this Cyberpunk 2077 guide to learn more about the Night City map! Find out about the map size, night city districts, map layout, locations, and more!

What Is The Night City Map?

Night City is the main setting of the game and is the star of the show. The city is made up of 6 different districts, each with its own unique and distinct themes, allowing you to immerse yourself while exploring the different streets and alleyways within!

Aside from the larger than life buildings, you should also watch out for the several gangs that rule the different streets. Some gangs have made some of these districts their home, and depending on what you've done, they may or may not be on good terms with you!

The large and looming buildings of Night City allow give players a new way of exploring this densely packed city. Aside from roaming through the different districts, players will be able to explore vertically by going inside the

The Heart Of Night City

The City Center, like its namesake is located right in the middle of Night City. It's characterized by the tall skyscrapers and neon lights. This is where the corporations govern themselves without any interference from the outside.

Get The Best Deals Here

Formerly used as a place for shelter during the nuclear disaster, the Watson district has now turned itself into a district buzzing with the commerce! Every nook and cranny will have different bazaars which you can peruse to find great deals!

The 2077 Equivalent Of The Suburbs

Heywood sets itself apart from the different bustling districts by being comparatively quaint. The district has several boutique shops and also features an urban park.

If you can make it in Westbrook, you can make it anywhere. Westbrook is full of housing blocks and capsule hotels. It is situated near the business districts, making it the ideal place to live for businessmen.

Santo Domingo is dotted with abandoned factories that have attracted criminals and degenerates to use as their home. Yet in some places, one can see luxurious homes and vistas, as well as schools and other small businesses.

At first look, one might think that Pacifica looks like a hopeless place. Rundown buildings, generally unkempt streets, and the like. However, looking at it from a different perspective will show you that with proper management, it can become Night City's premier tourist spot!

The Outskirts is the area surrounding Night City. Besides the majority of the area being a ghost town, the Outskirts are home to the Nomads, a group that survives through ambushes and theft.