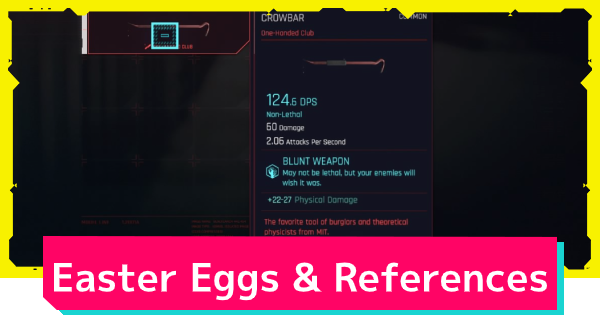 What Are Easter Eggs?

Easter Eggs are fun aspects of the game that are intended to be nods to other existing games, music, or media in general. They are often tucked away in not-so-obvious places, and are always fun to find.

Find Any? Let Us Know

We've compiled a list of easter eggs found by players across the internet here, but if you find one that we don't have, leave us a ▼comment below and let us know what you found!

Ghost In The Shell

A player found this easter egg on the screen of a computer somewhere - it turns out displays the icon of the 2006 Ghost in the Shell OVA "Individual Eleven"!

This particular advertisement seen on TVs in Night City parodies a similar scene in the popular movie The Matrix!

Given that it's CD Projekt Red's own game, it's not surprising that there are many Witcher references in Cyberpunk 2077. This one features a gaming magazine with the Witcher on it stashed away in a desk drawer.

This exchange is a direct reference to the character Big Smoke in GTA: San Andreas, who chastised a character named CJ! The names are cheekily altered, but the reference is undeniable!

These 3 shells are a reference to the 1993 Sylvester Stallone movie, Demolition Man! In that movie, the sci-fi society had abolished toilet paper - baffling Stallone's character and leading him to wonder exactly what the mysterious 3 seashells in the bathroom were for!

At the end of the video above you can see a container with a fetus inside, just like in the 2019 Hideo Kojima game Death Stranding!

This little arcade game is a reference to the horse in Witcher 3, whose name is Roach!

These two characters can be seen reenacting near word-for-word a famous scene from the Office where a doctor recounts his tale of escaping from the Yakuza after killing their leader! This easter egg can be found in the side job "Big In Japan".

Check Out 'Big In Japan' Here!

The body on the ground is a reference to the famous movie/franchise "Terminator"! The remains look similar to those of the robots sent by the nefarious Skynet corporation.

It turns out Delamain can also assume other voices - not the least of which is the infamous GLaDOS, of Portal fame!

Another Witcher reference, an image of Geralt's horse Roach can be seen on the side of a car!

Given the fact that Blade Runner is one of the best known works of Science Fiction that helped popularize the cyberpunk genre, it's no surprise that we see several references to it in-game. This one at a memorial site in north oaks makes a reference to the famous line of the character Rutger at the end of the film.

Walter White's purity is falling off in his old age. I love all the easter eggs! #Cyberpunk2077 pic.twitter.com/iQbwPVFrs6

During the Gig "The Heisenberg Principle", the name itself also being a reference, we see a lot of allusions to the popular show Breaking Bad. The quest deals with the manufacturing of a drug called "glitter", and in the details the drug's "purity" levels are also mentioned - as they were in the show with reference to Walter White's famous blue meth.

A two-in-one Half Life reference package: The crowbar's flavor text makes a reference to "theoretical physicists from MIT" (that being Gordon Freeman), while another shard's description pokes fun at how long players have had to wait for Half-Life 3.

This is a big one - Hideo Kojima, the legendary director of Metal Gear Solid and Death Stranding, is not only an NPC in the game, but also voices himself! Meeting and talking to him can only be done at a specific point in the game, so read our detailed guide to learn more.

Plenty of the icons of perks used in Cyberpunk 2077 are actually references to other popular works! We'll update this section as we find more of these - but if you know any, make sure to let us know in the comments!