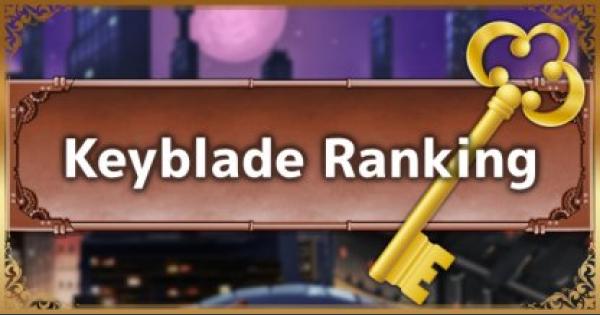 Know which Keyblade is the strongest in Kingdom Hearts 3 (KH3)! Check out this KH3 ranking guide on which Keyblades are the best, including the Ultima Weapon, Classic Tone, Wheel of Fate, & more!

The Ultima Weapon possesses excellent stats in both Strength & Magic, making it a very powerful Keyblade that boosts your combos for continuous damage. Enemy damage can be avoided by allowing you to phase and teleport out of harm's way.

Check Out How To Unlock Ultima Weapon!

The Wheel of Fate may not have the stats when compared to the Ultima Weapon, but it is a strong Keyblade that you can earn by simply playing through the story. Its attack & range make it easy to use against enemy mobs or single-target boss fights!

Check Out Wheel of Fate Keyblade!

Classic Tone is Keyblade that can be unlocked by gathering & playing 23 Classic Kingdom Mini Games. It has the highest Magic stats in KH3. Its MP Haste abilities allow you to regenerate HP quickly in order to cast incredible amounts of magic spell damage.

The Nano Gear Keyblade strikes a good balance between Strength and Magic. It is very flexible, you can use it both for ranged attacks to sweep mobs or for basic shots to focus on single targets during boss fights.

This Keyblade focuses more on Strength than Magic capabilities. It's a great choice of Keyblade when facing a singular-target boss fight as it can deal massive damage in few hits.

6. Ever After Keyblade Overview

Ever After has very high Magic stats, perfect for players who prefer spells to do damage. Its Form Changes are perfect for long & wide range attacks. This Keyblade excels in mob fights with many small enemies in an open area.

Check Out Ever After Keyblade!

The Favorite Deputy's strength lies in the flexibility of its two Form Changes. It has two transformation - one that does heavy damage while the other hits opponents very fast. This is great for players who prefer a dynamic Keyblade in battle.

Crystal Snow specializes in long-ranged attacks. If you prefer keeping your distance while destroying enemies - this is the Keyblade for you. Freeze Protection is useful to combat Freeze condition that triples damage you receive when frozen.

Hunny Spout has a decent balance in Strength & Magic statistics. It is easy to use in combat and its Form Change allows you to shoot ranged homing bullets to distant enemies.

One of the first Keyblades that you receive in the game. Thought its Strength stats are not very high, its Defender ability makes it possible to deal big damage when you block & counter an enemy attack.