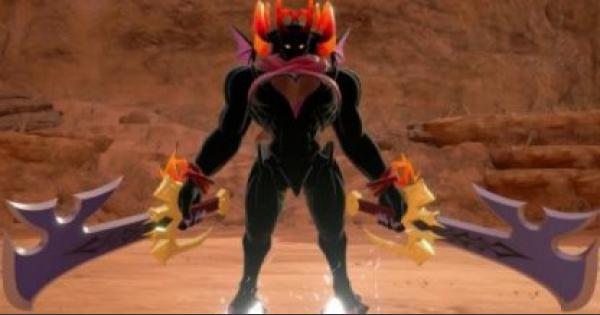 After beating the main story, you can visit the Wastelands in the Keyblade Graveyard again & you'll find Battle Portal 14 there. Activate it to trigger the fight against Dark Inferno.

Changes Forms When HP Is Low

When you've reduced the Dark Inferno's HP by a certain amount, it powers up. This happens in two stages throughout the fight with his attack & speed amping up every time. These Form changes are permanent, & will not change throughout the battle.

Focus on equipping Sora with high defense armor accessories. These will help combat against the high physical damage Dark Inferno can inflict on you during the battle.

The Keyblade Wheel Of Fate from The Caribbean is one of the better weapons to use against Dark Inferno. It increases its range of attack when it transforms and also increases the number of your combos.

It can be hard to manage your HP levels by using Curaga alone. Be sure to stock up on recovery items and equip them in your Shortcut menu so you're ready to heal when Curaga is on cooldown.

Make sure to check that you've set your Guard move and your passive abilities before fighting Dark Inferno. Due to its high offensive power, it's best to counter it with guards and defensive abilities.

Use Combo Boosts For Attack Abilities

When fighting Dark Inferno, it's best to use attack abilities that boost your combos - increasing your number of hits and the damage that you inflict. Dark Inferno only has few gap for you to attack it so your moves have to count.

Always Keep HP Up With Healing

It's recommended to always keep your HP up when fighting against Dark Inferno. Use Curaga or healing items such as Potions & Elixirs. If you cannot heal in time, dodge and run away for a bit.

Use Your Keyblade Transformations

Whenever you're able to activate a Keyblade transformation, be sure to activate it. These usually boost your attack power & will allow you to land powerful critical hits on Dark Inferno.

Focus On Fighting In The Air

Dark Inferno has attacks that are wide-ranged, but mostly near the ground. If you're up on the air, you can easily avoid these ground attacks. Try using Glide ability to keep your air time as long as possible

Dark Inferno Has 3 Stages Of Powering Up

Check Out Top Tips To Win In Battles!

The Dark Inferno starts off his attacks with a flurry of attacks, enough to take out good portions of your HP. Anticipate this attack and dodge his rush as soon as the battle starts to avoid being at an disadvantage.

Attack During Gap Between Its Moves

At this stage, it's easier to attack Dark Inferno as it will have significant gaps between its offensive moves. You can also open him up for hits by blocking him then pressing ◯ to counterattack.

Focus On The Timing When Summoning Spheres

When Dark Inferno summons spheres, it will disappear from the field. Focus on the timing where the spheres starts spinning fast to time your dodge and blocks.

Counterattack After Getting Hit By Launch Move

When Dark Inferno hits you with a launch attack, you can counteract his follow up sword attack by blocking then dodging. Compared to its normal state, Dark Inferno will hit you almost immediately after it launches you in the air so it's best to counter then dodge.

Counter After Its Ranged Attack Moves

Dark Inferno stays still in one spot when it's doing its ranged attacks. Jump and hit him from above, allowing you to avoid the ranged attack and inflicting damage from the air.

Dark Inferno's Purple Aura moves around quite fast, making it hard to connect your hits. When you do land a hit, it's best to use a Keyblade transformation then hit Dark Inferno again. You can deal more damage this way.

Countering Dark Inferno becomes harder when it activates its Red Aura. You can use the same tactic of countering after it implements its ranged attack but it gets harder this time around.

When Dark Inferno has its Red Aura, it cannot be damaged anymore by counter attacks after a block. Since guards are virtually useless at this stage, take its HP down with dodges & normal attacks.

Be Conscious Of Your Keyblade Transformations

At this stage, it gets increasingly more difficult to land a hit on Dark Inferno. Keep in mind to activate your Keyblade transformations manually to make sure every hit that connects will count.

Dark Inferno charges at you after a slash attack. This cannot be guarded against so it's best to dodge sideways to avoid getting hit.

When the launch attack hits you, the best way to minimize damage is to do aerial recovery then dodge.

Dark Inferno is capable of using guard as well. You can see it block your attacks by crossing its two swords together. When it guards, be careful of its slash attack when you make to attack it.

Dark Inferno has an attack that summons spheres of light. These will home in on you twice. It's best to glide around or dodge right when they're about to hit you.

This wide-range attack spreads around Dark Inferno in a sweeping circle. Jump and glide above to avoid taking damage as you can get stunned if you're hit by this move.

This time, Dark Inferno will do 2 slash attacks before it charges towards you. Guard the first slash then dodge twice to avoid this attack.

This move will add another slash attack before the downward attack. It's best to dodge these attacks then counter after the 2nd slash attack.

When Dark Inferno crosses its swords, it does not receive any damage when you attack it. Don't be aggressive and wait for it to uncross its swords to avoid getting hit by a slash attack.

At this stage, there'll be 3 rounds of homing spheres that will chase after you. Avoid them by gliding or dodging right before they're about to hit you.

You can dodge this move by simply jumping and gliding in the air. You won't be able to hit Dark Inferno even when it's standing still when its Purple Aura is activated.

If you get hit by all of these attacks, more than half of your HP will diminish. It's recommended to guard or dodge this set of moves or use glide to escape Dark Inferno.

Observe Dark Inferno's movements when it puts its guard up again. Be careful not to attack as it may suddenly do a counter slash attack on you.

This attack generally does not change from the Purple Aura version. However, Dark Inferno may show up to hit you during this stage so it's best to avoid getting hit by jumping up and gliding.

Be careful and avoid this attack by gliding. If you get hit, you will be stunned and you can get KO-ed instantly.

The Crystal Regalia is one of the best accessories in the game. It boosts both your strength & magic stats greatly, increasing your AP, and giving you the best ability in recovering your MP - MP Hastega.