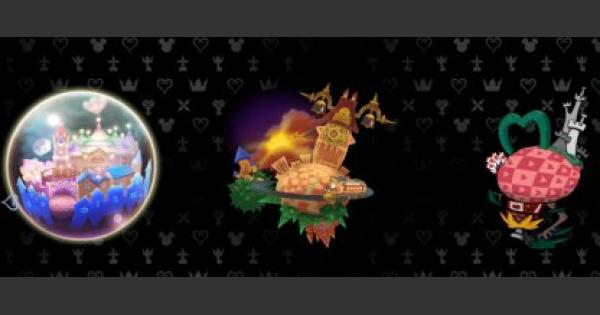 In KH3, players get to explore 7 brand new worlds! These include some of Disney's latest works such as Frozen's Arendelle, Tangled's Kingdom of Corona, & Big Hero 6's San Fransokyo.

Some Past Worlds Make A Comeback

Past worlds from previous Kingdom Hearts games will also make an appearance in Kingdom Hearts 3! This will give returning players a sense of nostalgia!

In January 23, 2020, the KH3 DLC, ReMIND, will be released worldwide. Taking the roles of Sora's friends, you'll get a new scenario in between the ending of the game and before the epilogue.

Sora and the gang are magically transformed into monsters to fit in Monstropolis! They meet Mike & Sully, the human girl Boo, in Monsters Inc - the monster company that provides energy to the entire city.

As Sora & the gang leave the Gummi Ship, they are transformed into small toys! Defeating the Heartless in the area, Sora meet with Woody, Buzz Lightyear & the rest of the toys to help resolve the situation.

After landing in a nice forest, Sora encounters a stranger chased by the Heartless. After getting rid of the Heartless, Flynn Rider is gone & Sora's troupe starts looking for him. They discover a mysterious tower hidden in the middle of the forest!

Check Out Kingdom Of Corona Walkthrough!

Sora goes back to Olympus to visit his friend Hercules who once lost his powers, just as Sora had. Arriving at the world, it has changed drastically from the Olympus Arena he used to visit.

Sora, Donald Duck, and Goofy arrive in a snowy, mountain area. While freezing in the cold, they battle with the Heartless in the area then notice a sad, young woman running across the sea & into the mountains.

The gang are enjoying their pirate life on the seas, floating along in their small raft. Rough waves come along & they are suddenly tossed over the edge of the ocean.

Check Out The Caribbean Walkthrough Here!

In their first visit to the city of San Fransokyo, Sora meets with the Big Hero 6. They train together by ridding the city of the Heartless running about.

As Sora uncovers the mysterious clues of Roxas, he arrives in Station Plaza at Twilight Town. Though Heartless & Nobodies are scattered throughout, the town is relatively peaceful. Sora reunites with Hayner, Pence, & Olette who are currently in their summer break.

After completing all the worlds and returning to the Gummi Ship, Sora receives an emergency message from Chip & Dale. Riku & King Mickey have found the gate to the Dark World!

At the Keyblade Graveyard, the sides of light & darkness finally clash together. In an epic battle, Sora & his friends struggle under defeat from the forces of darkness.

After completing Monstropolis, you'll be able to access the world of 100 Acre Wood! There are no battles here, just a bunch of mini-games. Complete them to obtain a new Keyblade!

Worlds in Kingdom Hearts are new places to explore and discover within the Kingdom Hearts games. Players have to adventure through these worlds & complete their stories to unlock others.

A Mix Of Disney & Original Places

Most worlds in Kingdom Hearts hail from the Disney movies and franchises. Some original places such as Hollow Bastion, Keyblade Graveyard, etc. are originally-created for the games.

Each world is separate from the other and most inhabitants never cross paths with characters from other worlds. They also don't have knowledge of worlds existing outside of their own.

Sora Changes Outfits For Most Worlds

Sora normally changes his outfit and look to fit into whatever world he explores. This can be seen in the former game worlds such as Halloweentown, Pride Rock, and etc.