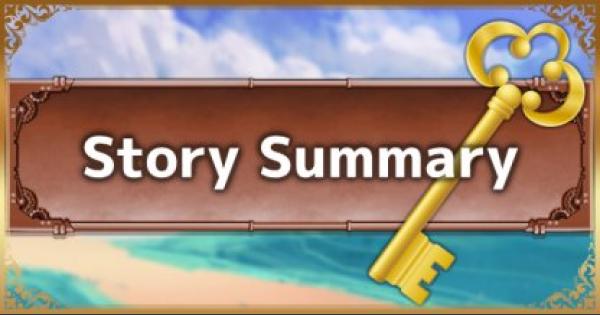 [WARNING]
This article may contain spoilers for the past Kingdom Hearts games.

Sora's Story & Dreams Of Another World

The story of Kingdom Hearts begins with Sora in Destiny Islands. Here, with his childhood friends, Riku & Kairi, they dream of worlds beyond the seas around their small island.

A Door Of Darkness Changes Everything

Everything stays the same in the Destiny Islands for Sora and his friends until a Door of Darkness opens and swallows the whole island up. Lost in the darkness, the three friends are separated and moved to different worlds.

Sora wakes up in a new and strange place called Traverse Town. This is where Sora meets the mage Donald Duck and soldier Goofy. They start to set out on their adventures to other worlds from Traverse Town.

The Fight Against The Darkness Begins

Sora and his new gang encounter the game's villains - dark characters that are obsessed with Heartless. During a battle, Sora awakens his power of summoning a Keyblade.

As Sora tries to foil the villains' plans, he reunites with his childhood friend Riku, who has also awakened to the power of the Keyblade. Succumbing to the darkness, Riku fights with Sora over this power.

The Mastermind Behind It All "Ansem"

As Sora and Riku battle it out, Riku loses and it is discovered that he has been manipulated by a man named Ansem. In the end, Sora faces Ansem to save his best friend, Riku.

Riku Stays In Realm Of Darkness

At the end of Kingdom Hearts, Riku is able to break away from Ansem's manipulation. He stays behind the door to the Realm of Darkness in order to seal off the passage to Kingdom Hearts.

After the events of Kingdom Hearts. Sora ventures into the world to find and rescue his childhood friend, Riku, and King Mickey from the Realm of Darkness. This is how he stumbles upon Castle Oblivion.

Meeting With The Black-Cloaked Man

At Castle Oblivion, Sora is greeted by a black-cloaked man who guides him through the castle. As he ventures into each room and floor, Sora slowly loses his most important memories.

It's A Trap Set By Marluxia

It turns out that Castle Oblivion is the research headquarters of Marluxia, a member of Organization XIII. Here he has laid a trap for Sora.

As Sora journeys through the castle, his memories of Kairi are being replaced with a girl named Namine. He sets a goal to "save Namine", a prisoner of Castle Oblivion, not knowing it was Namine herself who was manipulating his memories with her power.

In the final battle, Sora faces off with Marluxia to regain his true memories. He makes a promise to Namine that she will not be forgotten. This is how Sora and Organization XIII make their first connection.

The story begins in the perspective of a new hero named "Roxas". The newest member of Organization XIII and its 13th member, Roxas has no recollection of his past life before joining the Organization.

It is explained that when a person becomes a Heartless, their soul & body are left behind that create a shell called a "Nobody". Organization XIII is made up of Nobodies and Roxas is also one. In fact, he is Sora's Nobody.

After Roxas joins the Organization, another new member is introduced - Xion. Much like Roxas, she has no memory of her previous life and can also wield a Keyblade.

As Roxas, Axel, and Xion work together on their duties for Organization XIII, they fast become friends. This is a rare situation as Nobodies are known to be emotionless due to their lack of heart.

It turns out that Xion is a replica of Roxas, created as a back-up in case the Organization is not able to manipulate Roxas & Sora's powers over the Keyblade. Xion is ordered to capture & battle Roxas, to fully absorb the Keyblade's power for the Organization.

The Story Continues In Kingdom Hearts 2

At the end, Roxas is able to escape the clutches & defeat the plans of the Organization. The story then continues onto Kingdom Hearts 2.

The Story Begins With Roxas

Roxas Reunites With Sora To Wake Him

In order to wake Sora, Roxas has to merge & become one with him. Sora wakes up & learns that the plan of Organization XIII is to create a new Kingdom Hearts to regain the hearts they've lost. Sora adventures to stop the Organization and find his missing friends, Riku and Kairi.

Kingdom Hearts - Heart Of All Worlds

It turns out that Kingdom Hearts is the heart of all worlds and the source of great power, whoever gains control of it will have great strength. Sora fights with Xemnas, Organization XII's head, to prevent him from creating his new Kingdom Hearts and thwarting his plans. After he wins, Sora returns home to Destiny Islands.

While Jiminy Cricket is organizing his journal's contents, he comes across some notes he did not write. He seeks the help of King Mickey to make a digital copy of his journal & enlists a "Data-Sora" to uncover the secrets behind his notes.

A Prequel To The Kingdom Hearts Stories

Kingdom Hearts Birth By Sleep is the prequel of Kingdom Hearts. It happens before Sora earns his Keyblade and before the beginning of Organization XIII.

The Story Of The 3 Keyblade Apprentices

The story centers around three friends who are Keyblade Apprentices - Ventus, Aqua, and Terra. Their goal is to become Keyblade Masters. Another Keyblade Master, Xehanort, interferes and in the end he is able to manipulate & control Terra's body.

Xenahort's plan is to complete the χ-blade, the key that will unlock Kingdom Hearts. He plans to unleash the evils during the Keyblade War throughout all worlds. By merging Ventus & his apprentice, Vanitas, together, he plans to create the χ-blade.

After Xehanort's plans are thwarted, Terra passes his Keyblade power onto Riku while Aqua unintentionally passes hers to Kairi.

After the story of Kingdom Hearts 2, Sora and Riku learn that Xehanort will return and they have to take a Mark of Mastery exam to be Keyblade Masters.

The Real Purpose of Organization XIII

Riku Passes The Mark Of Mastery

After defeating Xehanort once again and he disappears, Riku passes the Mark of Mastery exam and becomes a full-fledged Keyblade Master. The story ends here and continues onto Kingdom Hearts 3.

The Search For The 7 Guardians Of Light

The battle over Kingdom Hearts is coming to a climax as Xehanort continues to build his plan of inciting another Keyblade War. It is prophesied that 7 Guardians of Light or Keyblade Wielder will fight against 13 Guardians of Darkness.

Return To Worlds Of Disney

The adventure goes back to Sora, Donald Duck, and Goofy who are traveling across the worlds of Disney to find the "Key to Return Hearts".