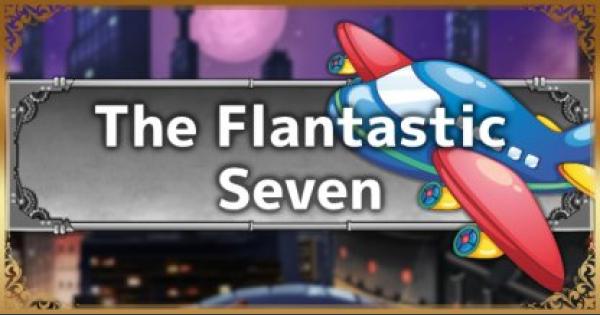 Check out this Kingdom Heart 3 (KH3) guide to find the Flantastic Seven in all the worlds! Including info Flan locations, mini-game guide and tips, and more!

What Is The Flantastic Seven?

The Flans are pudding monsters found in different worlds. Approach them and press the ▲ button to play their special mini game!

When you challenge and complete the mini games of the Flantastic Seven, you can receive various items & even special abilities!

Complete All 7 Mini Games To Get Orichalcum

If you are able to complete all 7 of the Flans' mini games, you'll receive a rare material called Orichalcum. These materials are needed to synthesize powerful accessories and even the Ultima Weapon.

Check Out Where To Get Orichalcum!

By completing all Flantastic Seven mini games, they will award you with an unique Flanniversary Badge accessory. Other than its excellent stats, this accessory also comes with great ability including MP Hastera. A must have for spell users!

*Indicated Target Score refers to the score where the guide editors was rewarded the High Score Reward.

Aim For The Arrows On The Ground

While maneuvering, try and aim for the arrow-marked areas after clearing the garden. You should be able to reach the high score if you play until the play time runs out after that.

On the first branching path, try to head down the left path where more Flans are spawning. Try to catch as much Flans as you can before heading out to the garden area.

To get the high score in this Flan's mini game, you need to shoot the rare Flans! Pancake Flans will only appear once during the entire minigame. Head for the tree to the left immediately after the game starts!

The Strawberry Flan around the outer edge will start chasing once approaching. Keep your eyes on the field & dodge the Flans!

It'll be hard to rack up scores if you just gather Flan rolling on the ground. Once you've stacked up Flan high enough & reach up to 10,000 points, aim for Flan that are flying in the air for higher points.

Focus On Dodging Than Attacking

The game will be over if you get hit by the giant Flan. When focusing on attacking smaller Flan, it's better to be evasive to avoid getting hit. Getting one or two hits in will be fine.

Use Aeroga & Keyblade Ever After

Range magic like Aeroga will be useful in this mini game. Using the Keyblade transformations of the Keyblade Ever After will also give you ranged attacks, allowing you to rack up points while avoiding getting hit.

"Ever After" Keyblade Recommended

Ever After after Form Change will have a wide range of attacks, perfect for dealing with multiple Flans at the same time!

Use Thunderga For Groups of Enemies

When the Flans groups up, try using Thundaga to wipe out the group and rack up scores efficiently.

You can reflect Grape Flan's Blizzard spell by using your Guard. You'll get more points this way and knock enemies down in just one shot.

Learn the Timing to Use the Center Bell

Using the center bell can fire all 4 cannons at the same time. This will not only destroy the normal Flans but also the bonus large Flan floating across the screen to rack up some extra points.

Use Central Cannon To Sweep Enemies

The goal of this mini game is to shoot down incoming watermelon Flan. You can use cannons to get rid of them. You can also use the central cannon to sweep the entire area but it has a cooldown. Press the □ button to move between cannons quickly.

Aim to Land in Front for the Flan

The Flan's hitbox are always relatively larger on their front side. When trying to land, always aim for the area where the Flans are facing.

Aim for Stationary Flans When Diving

After reaching the 9,600 score, additional speed dive motion will be added. This will make the jump more difficult, so try to aim for Flans that are staying still when this happens.

CherryFlan breakpoint is as low as 20,005 for form extender

The target score for the watermelon flan says 36500 but can be lowered to 29400. That's what I just got high score with.