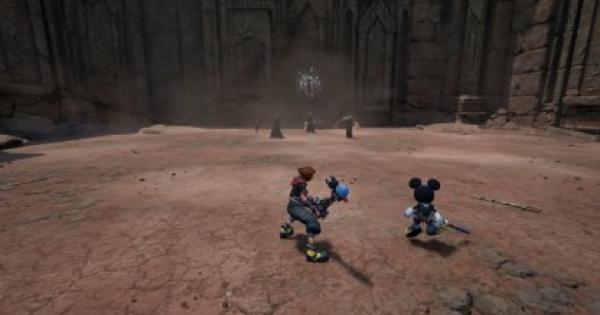 In the new Kingdom Hearts 3 ReMind DLC, you'll journey through the fight against Organization 13 once again, but this time you'll be able to control the different characters during the battle!

Characters You Can Control

In the ReMind DLC, you'll also have the option to fight the Organization 13 members once again in the Datascape. These are more challenging foes and provide rewards at the end of each battle.

You will need to choose between fighting with Riku or Mickey when the scene opens. Since you'll fight with both of them anyway, the order of your choice won't affect the outcome of the story.

The main fight will be Sora & Riku versus Xigbar & Riku Replica. Ansem will be at the fight at first but will leave after a short while.

In these fights it's best to face off with enemies one by one. Focus fire on one member and when they're downed, a cutscene will trigger & you'll fight the other member by themselves.

It's best to focus your attacks on Xigbar first as Riku's Replica specializes in sniping you from afar, making Xigbar more reachable.

Use Guard More Against Xigbar's Attacks

Xigbar has attacks that home onto you and hit you from afar. Even if you dodge, his attacks can still clip you so it's best to use guard instead.

Keep Riku's HP Up With Curaga

If Riku is defeated in battle, you'll have to face Xigbar and Riku's Replica by yourself. Use Curaga to maintain his HP so you can work together to bring down your foes.

When you fight alongside King Mickey, you'll face Organization XIII's Marluxia, Larxene & Luxord. If you down Luxord first, the story will move forward so focus your attacks on Luxord.

In these fights it's best to face off with enemies one by one. Focus fire on one member and when they're downed, a cutscene will trigger & you'll fight the other member by themselves.

When you reduce Luxord's HP enough, it will trigger his card move attack. He'll trap King Mickey into one of his cards and you need to play his game to release Mickey.

Hit Right Cards Or Game Will Start Over

When you need to play Luxord's card game, it's best to hit the right cards. If you don't, the game will restart. Keep in mind that you still need to avoid Marluxia and Larxene's attacks in this stage.

Attack Cards That Are Shaking Horizontally

Look for the cards that are shaking horizontally as they move around. These are the cards you need to hit to win the game so spot them correctly.

Change Camera View To See Back Of Luxord's Cards

You can also use your camera to view the back of Luxord's cards. You'll see his face emblazoned in them so you know these are the correct ones to hit.

Larxene has a lot of ranged attacks that can do heavy damage on you. You can avoid them by gliding and jumping into the air.

Use Dodges & Guards To Counterattack Larxene

Larxene moves swiftly and can be challenging to hit. Focus on dodging her attacks & guarding, reducing her HP with your counters instead of aggressively chasing after her.

Guard From Marluxia's Many Combos

Marluxia can hit you with many combos that are quite hard to dodge. You can break his combos by guarding and counterattacking, leaving him open for a series of combos yourselves.

Stay Passive Then Guard When Attacked

If Marluxia looks like he's gonna attack you, it's best to stay still and guard against his attack. Attack Marluxia from behind and dodge his attacks when you are facing him.

In your battle with Aqua, you'll face off with Terra and Vanitas. Vanitas can deal big fire damage using his fire spells so focus your attacks on him first.

In these fights it's best to face off with enemies one by one. Focus fire on one enemy and when you've taken them out, a cutscene will trigger & you'll fight the other enemy by themselves.

When you focus on attacking Terra, Vanitas will come in and snipe at you with his mid-range fire attacks. It's best to bring him down first before attacking Terra to avoid extra fire.

Vanitas starts riding a large Keyblade wave when his HP is low. It's best to run away from this attack as it will be hard to guard against.

When Terra is summoning the demonic god of darkness, you better start running away. It can damage you when it appears and it uses magic attacks that has a wide range so keep your distance!

p: After helping Aqua, you can now turn to help Axel and Kairi. You'll be fighting against Organization XIII members Saix & Xion. An event will trigger when you reduce Xion's HP, so aim your attacks on her first.

After Xion's Event, Face Saix By Himself

After reducing Xion's HP, you'll trigger an event and you'll regain control facing Saix with Roxas & Xion by your side.

It's best to face off with the members one by one. Focus fire on one member and when their HP is gone, a cutscene will trigger & you'll fight the other member by themselves.

When you focus fire on Xion and bring her health down, you'll witness a cutscene. When you regain control, you'll still face off with Saix but have Roxas and Xion fighting by your side.

Saix can hit you heavily when he uses his wide-ranged magic spells. Keep your distance and avoid his hits then swiftly closes in when the attack is over.

Xion & Roxas are important damage dealers in this fight. Monitor their HP on the lower right part of the screen then heal them if their health gets too low with Curaga.

In this fight, you'll fight the last 3 members of Organization XIII. These are Xehanort, Young Xehanort, and Ansem - the three most powerful members. Utilize all your skills, magic, guards & dodges to survive this fight!

It's recommended to single out one enemy and take them down one by one. Focus fire on a single target and when they're defeated, a cutscene will trigger & you'll fight the other enemies by themselves.

Focus Fire On The Version Who Has No Blade

You'll have to face three opponents in this battle and each one is different from the other. First focus and defeat the enemy that is not wielding any weapon, making it easier for you to attack him.

Escape The Summoned Hordes Of Keyblades

When Xehanort summons the hordes of Keyblades, it's hard to fight against your opponents. Try not to attack your enemies and just keep a safe distance away.

There's an attack in this fight that will heavily lower your HP. Immediately cast Curaga or use a recovery item to bring up your health bar and continue the fight.