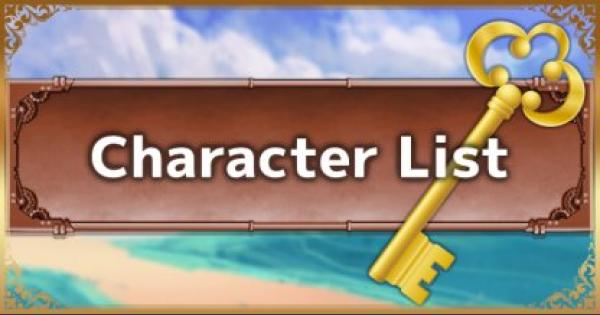 Check out this Kingdom Hearts 3 (KH3) guide on the characters you will meet in game, including allies & enemies you'll face, and their real life voice actors. Meet Sora, Riku, Kairi, Organization XIII, and more!

Sora is the main protagonist of the Kingdom Hearts series. He is the chosen wielder of the mysterious weapon, the Keyblade. Separated from childhood friends Riku & Kairi, he sets off to find them, only to end up in the fight between light & dark.

Riku is Sora's childhood best friend and rival. Through once lost in the darkness, he fought against it and now continues to fight while holding the darkness within himself.

Kairi grew up in the same island as Sora & Riku. Separated from them, she worries for them equally. She has decided to be trained on how to be a proper Keyblade wielder.

Goofy is King Mickey's Captain of the Royal Guard. He is Sora's loyal battle companion alongside Donald Duck. He fights alongside Sora with a shield, using it to protect the gang.

King Mickey is a Keyblade wielder and the King of Disney Castle. He is always there to rescue Sora when he's in a pinch and he is also helping in the battle against the darkness.

First appearing in the original Kingdom Hearts, Maleficent shows up in a lot of Sora's adventures. Her goal is to control Kingdom Hearts and use its power to dominate over all other worlds.

Pete was scheming bad things to happen at Disney Castle when he got trapped in another dimension, only being rescued by Maleficent. Though he is Maleficent's henchman, Sora does not fear him and often makes fun of him.

A villainous group that first appeared in KH: Chain of Memories, Organization XIII is part of Master Xehanort's plan to incite another Keyblad War and create another world after.