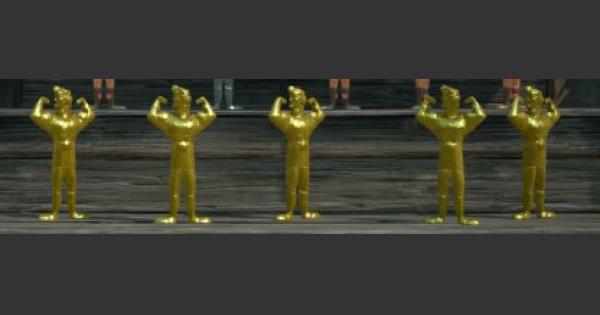 Complete all the Golden Hercules Dolls in Kingdom Hearts 3 (KH3) with this guide! Included here are its locations & what you get from completing all of them

Going around the city of Thebes looking for these Golden Hercules Dolls can be tedious. Check out our recommended route to collect the dolls efficiently!

Recommended Route to Get All the Dolls

1. Thebes Square - Talk to the Boy

In order for you to start this quest, you will need to talk to the Boy in Thebes Square. You can find him right in front of his toy collection.

2. Thebes Hill - Bench Next to the Mini Map

The first one is on the bench next to the place where you got the Mini Map. You can find this easily because it's right next to the warp point.

3. Thebes Hill - Where you Jumped Off the Roof

Slide Off the Roof

Land on the Pedestal

Hercules Doll is on the Left

The Second Golden Hercules Doll is located in the pedestal where you land after sliding off the roof. It's on the left side of the half-circle platform.

5. Thebes Garden - In the Fissure

Head Right from the Fountain

On the fountain's right, there is a path that will take you to where the Golden Hercules Doll is. This fountain can be found by going to the right from the Warp Point.

It is on the Fissure on the Ground

The Golden Hercules Doll may have been danger as it finds itself in the middle of a fissure! You can find the fissure to the left of the fountain.

7. Thebes Garden - In the Warehouse

Head to the Left of the Warp Point

From the Warp Point, turn left and continue forward. Go in the direction of the warehouse seen from a distance.

Look for the Man in a Purple Toga

A man in a purple toga will be standing outside the Warehouse's entrance. Use him as a landmark to ensure that you're going in the right one.

Get the Doll from Inside the Warehouse

The 4th Golden Hercules doll can be found inside the warehouse. It's on a table in front of the unused cart.

8. Thebes Square - Up the Stairs and to the Building

From the Main Square Go Up the Stairs

There's a stair on your left that will lead you to the building where the last Golden Hercules Doll is. Go up it and turn another left to find the building that's being constructed.

Go Inside Building being Constructed

The Final Golden Hercules Doll is in the building where you had a fight earlier in the game. Head inside to find the doll.

Doll is Next to Some Boxes

The final doll is on the floor next to some boxes! It's at the corner of the building so head straight there after entering it.

9. Thebes Square - Go Back to the Boy

After gathering all 5 Golden Hercules Dolls, head back to the boy at Thebes Square to get your reward! You'll get equipment for completing the quest.

Can only be Done after Clearing Olympus

The Golden Hercules Dolls will only appear upon clearing the main story in Olympus. Clear the story first before attempting to find the dolls!

Check Out the Olympus Walkthrough Here

Easily Pick Up the Dolls

Gathering the dolls is as simple as picking them up. This makes it easy as even battle, you can easily pick up the dolls!

Get Rewarded with the Hero's Belt

Completing the Golden Hercules Doll quest will reward you with the Hero's Belt. With its defense & magic resistance boost, it's a great armor to have in the early stages of the game!