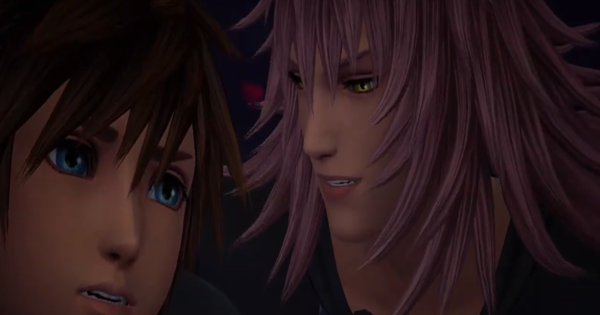 How To Beat Data Marluxia

Beware of the Instant Death Attack

Marluxia will occasionally cast an instant death attack, which will kill Sora in a single hit when successfully casted. When you see a number countdown on top of your head, attack Marluxia to open a QTE prompt to cancel this move.

You will be able to destroy the rose-shaped projectiles. Use Thunderga without locking on to quickly take them out!

Use Firaga When Using Aura

When you hit Marluxia with a Firaga when he is using his aura will allow you to remove the aura while opening his guard. This opening will be extremely brief, be sure to follow up as soon as you cast your spell.

Attack Only After Scythe Toss

After Marluxia uses Dashing Strike, he will bait you to come up to her, and then throws a Scythe in your face. After this toss however, he will be vulnerable, that's when you strike.

Marluxia will curse you & give you a timer that will kill you once the time is up. This curse only go away after you break his Armor Gauge. Just attack Marluxia as normal as the timer is quite long.

Marluxia will dash multiple times appearing from your sides to attack you. Keep dodging until he appears far from you. Usually followed up by a Scythe Throw.

Throwing spinning Scythe in a rebounding trajectory. Dodge sideways then up.

Pulls you in for a attack. Initiates when you get close. Don't approach Marluxia when he is taunting you.

Slams the ground causing an energy wave. Hover to avoid.

What about his last dm move like wtf. Hes like invincible and I cant touch him for the whole 99 seconds then I die. Soo?

What about his stupid DM move?