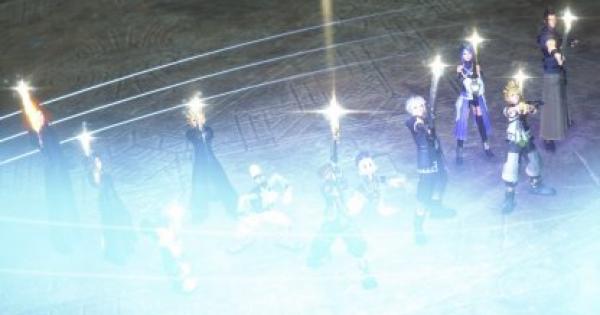 Vs. Mysterious Enemy ~ Vs. Xehanort - Chart

The final boss will deal extraordinary amounts of damage in any form it takes. Remember to set the Damage Control to active in order to minimize your chance of being downed with a single combo. Use robust armor with a high elemental resistance to keep safe!

Focus Attacks On Enemies That Are Easier To Defeat

You will encounter different types of Mysterious Enemies. Focus on the ones that don't require you to move around too much and use wide-range attacks that can easily sweep them off the floor.

Catch Enemies Off-Guard When They Attack

Multiple enemies will try to attack you all at once. Use guard and deflect their moves, opening them up for a counterattack of your own.

When Enemies Appear They Attack At Once

Be careful of Mysterious Enemies at night time. They'll attack you immediately as soon as they spawn so dodge & guard. Keep your HP up by using healing spells or recovery items.

Heal Yourself When Attacked When Launched In Air

When you're suddenly launched up, Mysterious Enemies will appear & attack you. This can cause a great deal of damage so heal up immediately after getting hit. If you get hit by this attack, the night instantly turns into day.

Be Careful Not to Mix Up Your On-Ground, Underwater, Mid-Air Controls

Armor Xehanort will start on the ground, proceed underwater and mid-air in the end. The controls may slightly differ, try not to get disoriented.

Your battle will take place in the voxelized terrain of the Scala Ad Caelum. Enemy will use AoE magic attack as their primarily means of attack, you may lose track of them in battle while dodging. It will prove difficult to dodge the enemy's attack without seeing their motion, so try to keep your camera on the Armored Xehanort as much as you can

While underwater, use your dive, swim up and fast swim to maneuver in water. The enemy's attack pattern will be limited, but has a large hitbox. Try to keep your

distance as much as you can when fighting him, and don't be too greedy when attacking. Be sure to create some distance between yourself after the combo to avoid being hit with his counter attack.

When fighting in the air, try prioritizing dodging the enemy moves. The recommended Keyblade for this battle will be Wheel of Fate or Nano Gear that can close in the gap and could zip away when in danger.

Master Xehanort will deal devastating amount of damage with each of his attack. Focusing too much on attacking may easily have you overpowered. Try getting used to his move by dodging and look for opening where his attacks eases up. Focus your attacks on that single moment, and prioritize your safety on the other phase.

Keep Your Eyes On Your HP While In Rage Form

After depleting Xehanort's HP to his last 3 bars, he will forcibly change Sora into his Rage Form. Not only will you not be able to damage Xehanort in this form, but you will not be able to heal in this Mode. To revert to your normal form, keep attacking Xehanort to collect pieces of light and push the prompted button to revert back.

Master Xehanort will pull off a strong shadow attack that will come at you from all around. Instead of dodging, focus on guarding with the □ button. This opens him up for a counterattack!

This is very helpful. I Am Leaving Now.