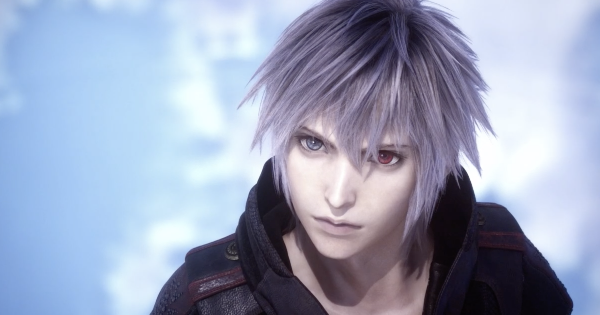 Yozora appears in a certain scene in the ReMind DLC. If you do not mind reading spoilers, check out the following article.

It is hinted that Yozora is the protagonist of the VERUM REX mini game found in Toy Box. He has a gun in his right hand, and a sword on his left. It looks as if he fights with a team to rescue a red-haired lady.

Looking at Yozora, his body, hair style, & face somewhat resembles Noctis, the protagonist of Final Fantasy 15. In latin language, his full name "Noctis Lucis Caelum" means "Night Light Sky", making us feel that there is some kind of connection. However, there is no official announcement from the developers regarding this supposed connection.

What Will Happen To Yozora? - Explained

May Be A Key Character In The Future

Yozora appears in a secret video in KH3's main story. He looks down on the city while sitting on top of a building. Right after this scene, the Master Of Masters appears, suggesting the possibility that both of them might appear as key characters in the future.

Yozora May Be Getting Involved With Sora?

In the final trailer of the Remind DLC released on December 10th, 2019, Yozora said, "Like, is any of this for real? Or not?" overlapping with Sora's voice. This probably means Yozora may be getting involved with Sora in the future.

The following sections contain spoilers! Stop reading here if you don't want to know what happens in the end game.

How To Beat Yozora (Video)

How To Beat Yozora

Carry A Lot Of Recovery Items

Curaga will not be enough in sustaining you in this fight as it takes a brief moment to cast. Remember to bring a lot of Elixirs for this fight. You can heal using items even after Yozora steals your Keyblade

Keep Dodging When Keyblade Gets Stolen

Yozora has an attack that can go through your defenses, allowing him to steal your Keyblade. Without a Keyblade, you cannot attack, guard, and use magic, so concentrate only on avoiding his attacks!

Yozora's Guard Lock On attack can limit Sora's maximum HP, severely limiting the effectiveness of healing. Watch out for this attack and use guard or dodge to evade.

Yozora summons four objects to contain and imprison Sora. If caught, Sora gets riddled with lasers inside the cage.

Yozora rushes at Sora, sending him flying and continuing his attack with an air combo.

Yozora imprisons Sora inside a cage, taking his Keyblade and using it to attack him.

If caught, Sora will get showered with numerous Keyblades. This deals damage and staggers him, keeping him in place.

I HATE FIGHTING YAZORA!!! HE STEALS THE KEYBLADE, TAKES ALL MY HEALING ITEMS, AND DRAINS MY HP TO REPLINSH HIS OWN! HOW DO YOU BEAT HIM!?!?

To the person who said you can't retry, that is not true. The first time you get there you lose and a cutscene plays. It asks you to save afterwards. From the main menu go to the DLC menu and choose secret episode and load that save.

There are no cutscenes and you can retry the fight.

His combos are all over the place, hard to really get a grip on it. When you don't have a retry ****on. Have to literally exit the game or rush past the cut scenes.