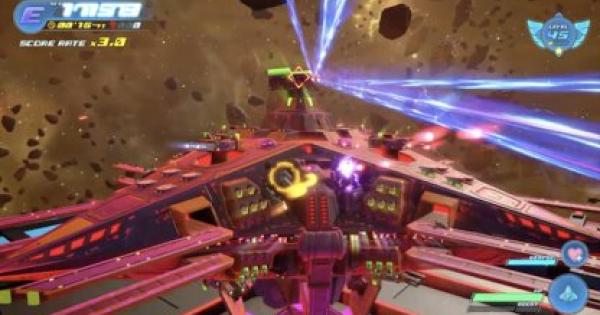 In this article, we feature how to find and beat the Gummi Ship boss "Omega Machina" in Kingdom Hearts 3 (KH3)! Find out where to find the boss & recommended Gummi Ship to use here!

How to Find Omega Machina

1. Complete Story Up Until Keyblade Graveyard

To find Omega Machine, you will need to finish the story up until the point where you will be able to access the Eclipse. The Eclipse is accessible via the Keyblade Graveyard.

After defeating the Gigant Pyramid, 4 mini bosses will spawn to the east, west, south, and below the central facility. Look for red mark on your screen & defeat all 4 mini bosses. One of the mini boss, the "Grand Warrior" has high damaging attacks, be careful when facing him.

▼Find Out How to Beat vs. 4 Mini Bosses!

4. "Omega Machina" Spawns Above the Facility

Beware of Its High Damage Attacks

Most of Grand Warrior's attacks pack quite the punch. Be sure to dodge his moves carefully with □ key & attack when it lets up his attacks. Don't be too greedy in your attacks however, you may get hit with hefty counter attack.

Be wary of the Scarlet Shark's tackle attack. You should be able to dodge his attacks by moving the corner of the screen with the □ key.

There aren't any specific point to note about this boss. Try using the Special Weapon when groups of enemies spawn.

There aren't any notable points for beating this boss. Be sure that your attack connects as much as you can, and time your special weapon usage when multiple enemies spawn.

"Omega" Gummi Ship is Most Recommended

The "Omega" Gummi Ship, is powerful and accessible as long as you find the Constellation Blueprint. This Gummi Ship has both high HP & Damage output, and will be able to take these bosses on without upgrades.

Omega's Blueprint Found in The Eclypse

Omega's Blueprint (Constellation) can be found in The Eclypse galaxy. This Gummi Ship is extremely powerful, even enough to defeat the Omega Machina boss. Be sure to take a photo of it as soon as you can.

Aim for destructible components to deal extra damages. Be sure to keep your health up when your HP goes below 1/4 of its original amount.

Be wary of the high damage yellow laser. Heal accordingly when you lose your HP, and destroy all 6 components in the front!

The double homing projectile will be relentlessly chipping off your HP. Dodge accordingly using the □ button and keep your HP up with the Repair Kit

The Final Form will spam laser barrages, but the hitbox of its moves are actually smaller than they appear. You should be easily be able to dodge them by flying up or down the screen. Use your Repair Kit frequently, around when your HP hits below 1/3.