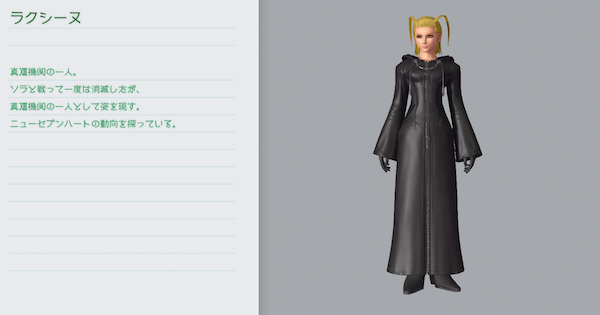 How To Beat Data Larxene

When Larxene jumps up and throws her lightning kunai, you can jump up and attack her. She's open to attack and you can land very powerful damage onto her.

Attack After the Triple Shockwave

Her triple shockwave attack will leave her open after she completes the attack. Evade the attack then close in to counter her!

Guard Counter After the Slash Flurry

Guard her slash flurry and wait until she jumps to evade. Hit her with a Guard Counter at this timing.

Larxene will go into a Lightning phase signaled by creating multiple lightning orbs in the sky, where she will become hyper-charged and attack nonstop. It's best to dodge or roll away from her to avoid taking damage.

Larxene will be slow and vulnerable after her Lightning Phase, letting you deal high combo damage to her. Prepare to move away as she will go back to Lightning Phase after taking lots of damage.

Hit Mirages To Clear Them

Periodically, Larxene will summon mirages of her to swarm you with. Hit them once and they will disappear.

Larxene electrically charges her kunai and throws them forward. When they land, they will create pockets of lighting that will damage you. Dodge forward or jump up and attack her to keep from getting hit.

Jumps in the air and slams the ground with lightning. Jump up in the air before it hits.

Throws multiple tracking lightning on the ground that will track toward you. Dash to one side repeatedly to avoid.

When Larxene's life lowers, she'll summon mirages to take you down. You need to hit them for them to disappear but they do the same attacks that regular Larxene does.

3 of Larxene's mirages will appear out of thin air and swoop towards you. Be careful as they can deal heavy damage towards you.

When Larxene has her mirages out, she'll spin around you with them, creating an electric circle. She'll then barrel towards you. This move is hard to dodge or guard against so make sure your health is up.