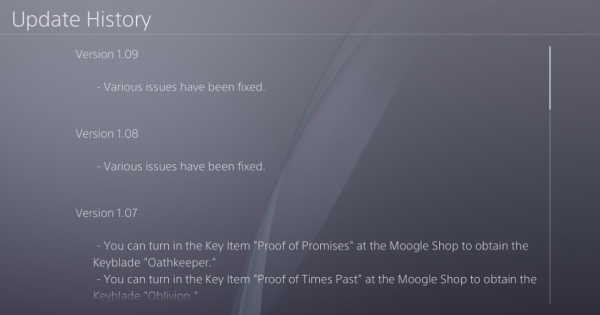 Patch 1.09 was released in time with the new ReMind DLC. Although the official update history is pretty brief, it contains some major changes to combat gameplay & cutscenes!

Pulling off Air Combos have become easier in Patch 1.09. The delay between starting an air combo has been removed so you can continue another chain immediately after completing the last one.

Players can now cancel the "Speed Slash" and "Triple Rush" finishers by performing a roll or a dash. This will prevent the animation lock of the moves.

The "Magic Flash" also received an update in its animation. Besides a better animation, it also got a clearer hitbox.

Multiple cutscens in the main story received an update either in their animation, lighting, or music. This greatly improved the cutscenes to be on par with the rest.

Update 1.08 was simply summarized as "Various Issues Have Been Fixed" in the Update History of the game. This patch contained fixes and resolutions for bugs and other issues of the game.

Two Keyblades from previous games have been added to Kingdom Hearts 3 as part of the 1.07 Updates. The Oathkeeper and the Oblivion Keyblades can be obtained by completing specific objectives!

The Oathkeeper Keyblade can be unlocked by turning in the "Proof of Promises" item to the Moogle Shop. The Proof of Promises can only be obtained by finding and taking a picture of all Lucky Emblems in the game.

Sora can now utilize new Forms added as part of the 1.08 update. These forms will require you to use specific items to be able to use them in battle.

Change up your combos with the new Abilities added to the game!