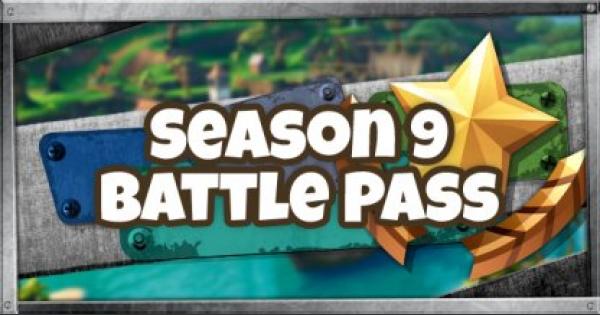 New Free and Premium challenges will be released weekly throughout Season 9! Completing them will award XP, Battle Stars, and even Secret Battle Tiers.

Managing to complete sets of weekly challenges will give you access to secret 10 Battle Stars! That's one tier for free just for completing your challenges!

There are more than a hundred cosmetic items to earn in the Season 9 Battle Pass! Collect Battle Stars to rank up your Battle Pass and unlock the Tiers.

Personalize your style with the new skins available in the Season 9 Battle Pass! You can expect them to follow the theme of the season.

Change the way your Glider looks and fly into battle in style with the Season 9 Glider Skins.

Look stylish while breaking down objects with these new Pickaxe skins from the Season 9 Battle Pass.

Show off different looks for your guns and weapons! These new Wraps from the Season 9 Battle Pass will do nicely!

Show off what you're really feeling! New Emotes from the Season 9 Battle Pass will let you dance it out even when in the middle of the battlefield.

Set off your trails with the latest Contrails from the Season 9 Battle Pass.

Feeling lonely in the battlefield? Pets from the Season 9 Battle Pass will give you company anytime, anywhere.

Toys are emotes that come with added extra features! These emotes actually spawn objects when used. They don't give any gameplay advantages through.

Unlock and select music that you can hear in their lobby screen. You can select which music to play in the Locker.

Fortbytes are a collection of challenges that are updated daily and are exclusive to Battle Pass owners only. Collecting Fortbytes unlocks exclusive cosmetic rewards, including skin styles, pickaxes, gliders and more!

Collect 90 Fortbyte to Get Singularity

SINGULARITY can only be unlocked by obtaining a total of 90 Fortbytes. It doesn't matter which ones you collect so long as the number would be equal to 90.

How to Unlock Singularity Color Styles

Other than her staged styles, Singularity also has multiple color styles for players to unlock. Unlocking them will have players looking for helmets representing the styles around the map.

How to Change SINGULARITY Color Styles

The Future is Here in Season 9

Teasers have been released, suggesting that the new Fortnite Season will take on a more futuristic turn. The Future is Unknown could be the arc words or the theme of this season.

Check Out What to Expect from Season 9

Fortnite has confirmed that Season 9 will launch on May 9. This is almost immediately after the end of Season 8.