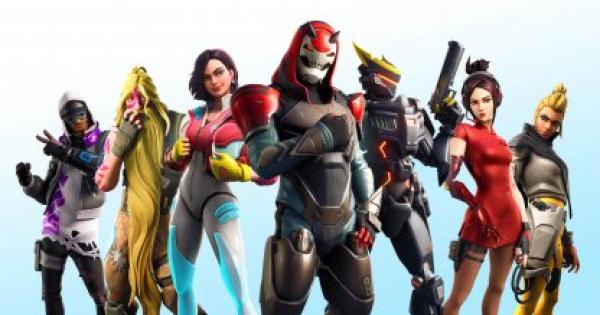 Fortnite Season 9 is here! Learn everything to know about the new season, including its trailer, theme, Release Date, Battle Pass, & more!

Season 9 Brings the Future to Fortnite

The Future is here and it looks better than ever! Fortnite's Season 9 brings with it a whole new Battle Pass, map changes, gameplay updates, new features, and more!

Transport Into the Future in Season 9

After the destruction brought by the Volcano, the island has gone straight into the future! With futuristic cities, robots, and mechanical cats, it's a different experience all around!

The Future is… yours!

Downtime for Season 9 has begun. Dive into the patch notes to see what’s new: https://t.co/nyny3LqJZ9 pic.twitter.com/yf1QBpGQOK

A new season means a whole new Battle Pass! Get ready to earn up to a hundred and more cosmetic items by leveling up your Battle Pass tiers!

As with every other Battle Pass, the new Skins are always the highlight and Season 9 does not disappoint. With 7 skins, 2 of which are progressive, they follow the season's theme with mechanical hands, robot chickens, and a misplaced old timer.

Vendetta's name matches his fearsome appearance. From a regular guy, he transforms to a cybernetic warrior hell bent on revenge.

Check Out the Vendetta Skin Here

Looking like a superhero in her powered up get up, Rox is down to fight to save the future! She's unlocked as part of the Season 9 Battle Pass Tier 1.

Check Out the Rox Skin Here

At first glance, Sentinel looks a bit silly as a robotic chicken, but he's as strong as they come! You get him immediately after buying the Battle Pass.

Check Out the Sentinel Skin Here

A survivor of the Volcano's eruption, Bunker Jonesy is a man out of his time. His hygiene isn't that great seeing as he's been stuck for a while inside a bunker.

Relying more on her natural strength, Vega makes quick work on enemies who put too much faith in their technology. She's strong by her own and she knows it.

Check Out the VEGA Skin Here

A Storm Stalker, Stratus plunges headfirst into danger. No one gets in his way as he heads for the eye of the storm!

Check Out The Stratus Skin Here

Even the future needs spies and Demi is at the top of her game. She's beautiful and cunning, a deadly combination.

Check Out The Demi Skin Here

Get ready to pet these cute robotic critters! New Pets can be earned as part of the Battle Pass, including this robotic pink kitty!

The wraps in the Season 9 Battle Pass will give your vehicles and weapons a makeover to fit the future!

With more than 100 cosmetic items to earn, you'll get your fill of new Pickaxe & Glider skins, emotes, sprays, and more in the Season 9 Battle Pass.

Semi-automatic with a lot of power with every shot, the Combat Shotgun is a powerful weapon to yield for close-range engagements. It comes in Rare, Epic, and Legendary variants.

Grenades are Back from the Vault

Grenades will be coming back to Fortnite with the release of Season 9! They'll be added to the loot pool across all game modes.

Check Out the Grenade Guide Here

In the Season 9 map, you will find 3 new locations! The futuristic cities now stand where the Volcano's destruction struck the most, a welcome change to the island!

The razed Tilted Towers has been transformed into a city of the future complete with hologram advertisements and sleek high rises.

Mega Mall has replaced the once humble Retail Row and turned it into a shopping complex worthy of the future!

Travel in style by flying through the Slip Streams around the map. You can find them in some of the new cities, including Mega Mall and Neo Tilted.

Uncover the Mystery of the Island Through Fortbytes

Find Out More About Fortbytes Here!

Explore the island and gather Fortbytes to learn more about the island, unlock challenges, and get exclusive rewards.

Found Across the Island

Fortbytes are scattered across the island for players to find. Each Fortbyte requires you to fulfill specific condition to access them. They don't appear all at once though and will be unlocked daily.

Collect Them to Get Rewards

Once you've collected Fortbytes, they will add up and unlock exclusive rewards for those who found them, and will also uncover a mysterious secret image. Check out your progress in the Fortbyte tab in the Challenges menu.