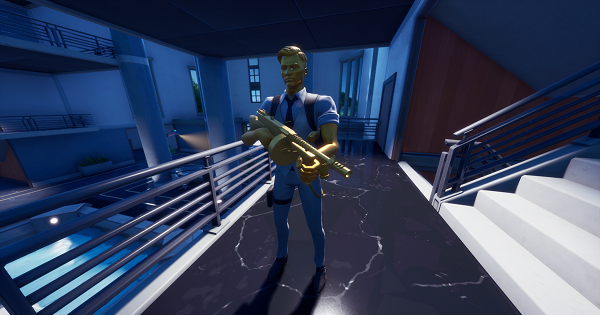 Fortnite
How to Get Midas Drum Gun - Weapon Location & Stats

Check out the Midas Drum Gun mod weapon in Fortnite chapter 2 season 2! Learn more about the weapon's stats, traits, how to get, location, and more.

Midas Drum Gun is a mythical rarity weapon. It has better stats than your average Drum Gun, making it a highly sought after weapon! Having this weapon in your arsenal greatly increases the chances of you getting a victory royale!

>>Check Out the Drum Gun Here!

How to Get Midas Drum Gun

Defeat Midas in the Agency

In order for you to get this strong weapon, you will need to fight and defeat Midas at the agency. Midas is a powerful boss, so it would be best to equip yourself with strong guns, and healing items to prepare yourself for the fight!

Midas is a Battle Pass Skin

Midas is one of the featured Battle Pass skins in chapter 2 season 2! This Legendary skin is unlocked at Battle Pass Tier 100!

Check Out the Midas Skin Here!

The Agency is found right in the middle of the map. It will be a lone island surrounded by a lake.

Check Out the Season 2 Map Changes!

Midas' Drum Gun is an excellent weapon to have on you during a match. Thanks to its superb firepower, you will be able to mow down enemies no matter which mode you're playing in!

To get the most out of the weapon, you should ideally engage enemies from close to mid range. The weapon will start to lose its effectiveness once you start to engage enemies at longer ranges.

Midas' Drum Gun is an excellent weapon which boasts impressive damage to go along with its high fire rate. This weapon is on a class of its own, allowing you to win most if not all of your combat engagements!

Can Be Used to Suppress Enemies

Thanks to its large magazine size, you can pressure enemies behind cover by unloading your whole magazine on them! By providing suppressive fire, you can pin down enemies to a location and gain the positional advantage!