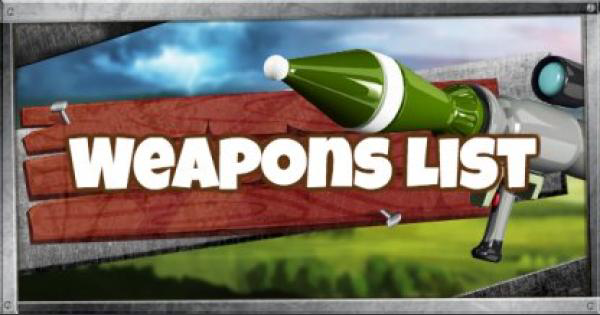 Learn all about the different weapon and gun types in Fortnite in this guide! This includes the all weapon and guns list, stats, damage, weapon skins, and more!!

Check out the Best Weapon Ranking

Check Out How to Get the Heavy Assault Rifle

A weapon that's easy to use and can dish out intense damage, Assault Rifles are versatile across all ranges and have a high damage output. It fires in full auto with a good magazine size, good for maintaining aggro.

Shotguns are powerful weapons that are capable of taking down enemies in a few shots... as long as they're in close-range. Its bullet spread can hit enemies, even if they're moving to escape!

Check Out How to Get the Burst SMG Here

High fire rate with good damage, Submachine Guns have among the highest DPS in the game that is balanced out by its high damage drop off and spread outside of close range.

No Minigun Weapons in Current Season

There are currently no Minigun items available in the game right now. We will update this section if one of them gets out of the vault.

Miniguns are capable of taking down structures and forts quickly thanks to its high fire rate, damage, and lack of reloading. However, its loud shooting sound makes it easy for enemies to spot you.

Check Out How to Get the Heavy Sniper Rifle

Sniper Rifles rely heavily on a player's skills to track bullet drops to connect with targets. It's the quintessential long-range weapon with some of its variants capable of eliminating enemies in one shot.

No Crossbow Weapons in Current Season

There are currently no crossbow items available in the game right now. We'll update this section if one of them gets out of the vault.

The Crossbow is a great weapon to have when engaging enemies in from mid to long range. It can pack quite the punch if in the right hands, but is a little slow due to its slow reload speed and fire rate!

High damage over an area of effect, Rocket Launchers can take down forts and enemies in just a few shots. They shoot projectiles so it takes a bit of adjusting when using them.

Handguns are best used in close to mid range due to their damage drop off. Handgun variants differ in traits, but they all share the first shot accuracy, making every first shot from a pistol deadly accurate.

Each Throwable weapon is unique to other Throwables. Some can damage enemies, while some can help players to escape deadly situations. It's best to learn each throwables differences!

How to Change Weapon Skins

You can use wraps to change the way your weapons looks in Fortnite. This is purely for cosmetics. It will not change the way the weapons work or its stats when used.

Whee was the mythic goldfish

where are deadpool's pistols?

Thank you for this helpful guide!