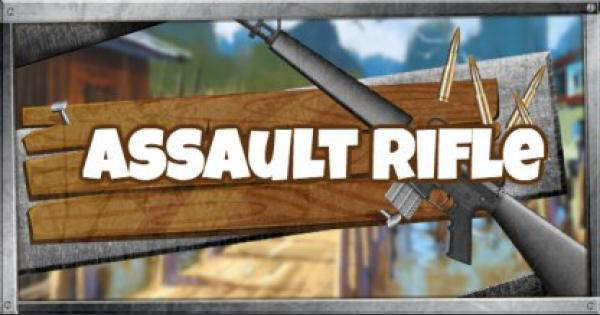 Assault Rifles are a great choice as a main weapon in Fortnite. It's high damage and versatile range can easily pressure enemies and take down cover.

Mid-range is where the Assault Rifle is best. It's an average weapon in close- and long-range, but it's still capable of bringing down enemies in these ranges.

With its high damage output, the Assault Rifle can easily shred enemy health and shield. Connect your shots and your enemy will be down before you have to reload.

It's not the best in short-range and long-range combat, but it's still considerably effective. You can easily use the Assault Rifle to get out of tight spots.

The Assault Rifle is a hitscan weapon so landing shots are easier compared to projectile weapons. Add this with it's range and accuracy and it just ramps up its overall effectiveness.

Shoot in short bursts to keep your accuracy and save your bullets. When engaging in long-range battles, shoot two or three bullets to suppress recoil.

Engage your enemies at mid-range.

Don't be afraid to pressure enemies and make sure to connect your shots. An Assault Rifle can easily rip through an enemy's shield and their health.

Watch Out for Higher Rarity Versions

There is a ridiculous jump in damage between the lower rarities and the Epic and Legendary versions of the Assault Rifle AKA "SCAR Rifle". Get a hold of one of them and you can easily melt enemies.