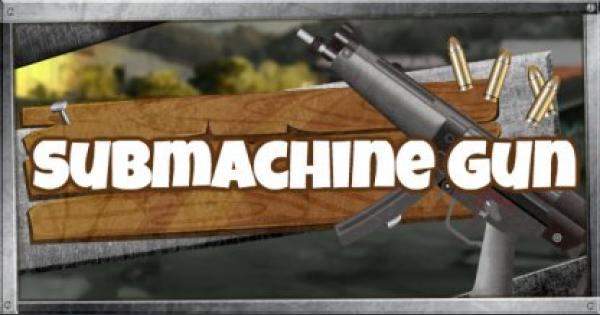 This article has been updated to the changes made in Chapter 2 Season 2. Read on to know what's been changed with this weapon type!

In close combat, Submachine Guns can easily gun down enemies with their high damage per second and extremely fast fire rate.

Due to its damage dropoff and bullet spray, Submachine Guns become less effective the longer the range. At mid-range, it can still be effective but it won't deal as much damage as up close.

Submachine Guns are a point and shoot type of weapon. It's easy enough to be used by both beginners and veterans alike.

Submachine Guns work best when engaging enemies at close quarters. Use another weapon as you close the distance to your target then switch to a Submachine Gun to deal high burst damage when in range.

Submachine Guns can easily burn through your ammo supplies due to their fast fire rate. Either carry another weapon as backup or shoot in controlled bursts to save ammo.

Excelling in fire rate, Submachine Guns are excellent weapons to use solo or in teams to provide covering fire, destroy buildings at close range, or dish out damage.

The Suppressed SMG is able to fire rounds at a high rate. What separates this weapon from other submachine guns is that it is silenced, allowing for more tactical and stealthy takedowns!

The Burst SMG uses a burst type firing mode, making it only shoot out a few rounds when you pull the trigger. Despite having a slower fire rate than other SMGs, it is still an extremely viable weapon since it allows you to keep your aim trained on your target better!