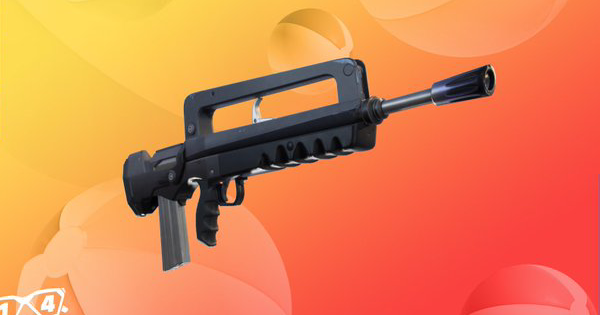 Dealing a good amount of damage with low recoil, the Burst Assault Rifle is a great weapon to take with you. It can be used to hit targets from mid to longe range while you're alone, or while teammates provide cover for you.

The Burst Assault Rifle can be used from any range. It prevents players from spraying their bullets all over the place. It still packs a punch in close range, but since it only fires in bursts, it is more efficient to use from mid to long range.

The Burst Assault Rifle does not continuously fire bullets. Due to its precise bullet grouping, it allows for more accurate shots in long range so you can focus more on your target.

Not Very Effective Against Structures

Due to its burst fire nature, the Burst Assault Rifle cannot quickly destroy structures such as walls, and stairs. Try using another weapon that can fire continuously when destroying structures.

Using the Burst Assault Rifle from mid to long range may help you hit your target more easily. It is recommended to switch to another weapon more suited to close combat when enemies close in.

The Burst Assault Rifle lets you engage in combat safely. By firing a burst and hiding after, you only expose yourself for a brief moment so enemies will not be able to easily hit you.