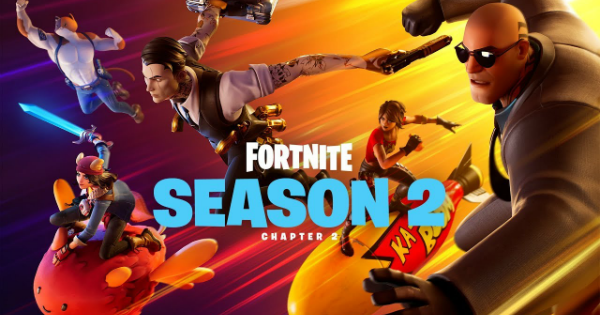 These are unofficial Patch Notes for v12.00. This is based on our own research on the release.

The Agency Beckons this Season

The call is in. Are you ready to join the Agency and become one of the specialized spies on the island? Fortnite's latest season takes on a glamorous spy theme with a touch of gold and mystery to boot!

Along with a new season comes a whole new battle pass. Earn more than 100 different cosmetics items, including skins, gliders, pickaxes, and more by leveling up your battle pass.

Season 2 brings with it a new Battle Pass filled with season-exclusive rewards. You must buy a Chapter 2 Season 2 Battle Pass to enjoy its tiered rewards.

Bosses and Henchmen are hostile NPCs that can be found in the new areas introduced in Chapter 2 Season 2. Defeat them to get loot and even the new Mythic Weapons.

Check Out the Boss Locations Here

There are doors & item boxes in the bases that are locked via ID Scanners. Unlocking them will require players to either look like a Henchmen or use a Henchmen. Vaults function in the same way, but will require Keycards to unlock.

Put on a disguise by using newly implemented Phone Booths. You can only disguise as a Henchmen though.

Healing Items Can Now Be Thrown

Health & Shield Items can now be thrown! This is very effective when playing in squads and you're teammate is in dire need of some recovery items.

Changes to the Team Rumble LTM

After being revamped in Chapter 2 Season 1, it seems like the Team Rumble LTM will receive another batch of changes this season.

Fortnite's Chapter 2 Season 2 is expected to release on February 20, 2020. However, there are no official statements that reveal the start time of the new season. Check back soon to learn more about the exact release date for Chapter 2 Season 2!

Fortnite's official Twitter account has started posting cryptic tweets, that may allude to the theme and contents for the new season. From what we can see, the images have a black and gold theme, as well as foreign words that mean thugs, henchmen, followers, and more.

The current schedule of the end date of Season 2 is April 30th. However, this may be changed by Epic Games later on.