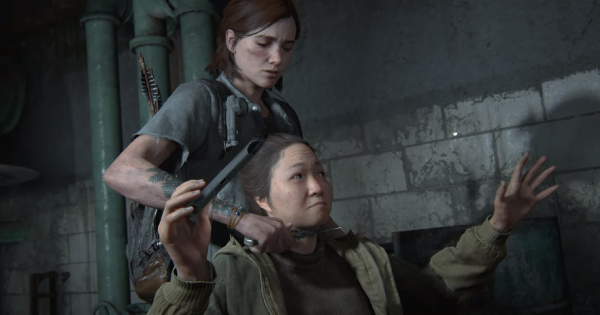 Last Of Us 2
Gameplay Details & Trailer - State of Play Breakdown

Read this for all information announced in State of Play trailer for The Last Of Us 2. Includes summary for gameplay details, combat, crafting, lore, enemies & more!

The Last Of Us Part 2's latest detail have been released on the latest State Of Play video on May 28th 2020. The following will be a summary & breakdown of the said feature video. If you want to see the gameplay in action, click the player above to watch the video!

The story of The Last Of Us Part 2 takes place several years after the previous game, now the two have settled down in a safe haven of Jackson, Wyoming. Their peace, however has come to an abrupt end. Ellie sets off in search for retribution back into the infested world.

Check Out The Story Campaign Here

Elie's long and unforgiving journey will span across multiple season and climates, including snow capped mountain to lush forestry, and desolate urban city of Seattle.

With the introduction of new traversal mechanics, such as rope scaling, Ellie can find wider variety of methods to explore and evade potential threats.

Horseback riding will also make a return in The Last Of Us Part 2, allowing you to cover grounds more quickly in more open expansive terrains. There are also certain flooded areas that require boats to be traversed.

Use Environment For Stealth

The overgrown environment can also be used for your advantage as well. Prone behind the tall grass to cover your direct line of sight. Crawling through tight spaces to evade pursuit is also a viable option to reestablish stealth.

Ellie's journey eventually brings her to Seattle, a massive ex-quarantine zone, now in ruins and under conflict between 2 factions; Washington Liberation Front (WLF) and Seraphites.

Washington Liberation Front, otherwise known as WLF, was a militia group originally born to fight back the military occupation of Seattle. They have long since won their liberation from their oppressors, and are considered very powerful threats, equipped with confiscated military gears and guard dogs. They will confront trespassers with aggression, including you.

The Seraphites, or Scars are a group of religious zealots. They can be distinguished by the self applicated cuts across their face, and will act with aggression with territorial violation. Where they lack in equipments, these zealots uses their knowledge of environment as their cover and weapons.

The victims of the Cordyceps Brain Infection is still a widespread threat in this world, and are more vicious than ever. New types of mutations will be introduced such as the heavily armored Shamblers alongside the already present Runners, Stalkers, Clickers and Bloaters.

Use Listen Mode To Check Your Scent Traces

Some enemies will utilize guard dogs that can catch on your trail even while in cover. You can check your scent trail while in Listen Mode. Try to distract your enemies while you stay hidden.

Ellie is usually faster and agile compared to her opponents. Learn the enemy attack patterns and time your dodge to make an opening for counter attacks while taking no damage.

There are occasions where multiple factions will be present in the zone. You can lure the enemies to pit them amongst each other. You can either choose to flee during the confusion or wait until the targets have weakened for you to strike in an advantage.

By collecting Training Manuals found scattered around the world, you can find new ways to craft items, upgrade weapons and skills. The variety of skills you can choose cater to enhance different play styles.

From explosive arrows to suppressors, you will have wider variation of consumable items to craft on the fly. Be sure to keep an eye out for any materials that can be used to create these new gears.