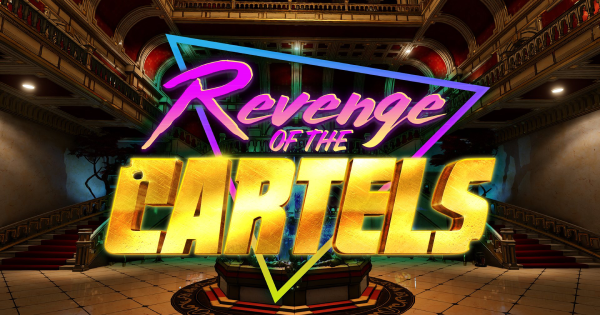 Check Out the Latest Patch Updates

Revenge of the Cartels Mission Walkthrough

2. Defeat Thugs To Get 30 Coordinates - Tips

Head To Ascension Bluff To Start

Lectra City is one of the best places to look for and farm for Cartel thugs. There is a steady stream of enemies, allowing you to farm coordinates fast.

To identify Cartel thugs, they will be named as such. But they will also have a neon glow that makes it easier to pick them out from the rest of the enemies.

When you defeat a Cartel thug, they will call for back-up. Defeating the back-up will make them drop the coordinates to find the Cartel hideout.

Clear All Enemies To Open Gates

When you get to Villa Ultraviolet, you'll need to clear the areas of enemies before you can proceed to the next one. Gates or doors will only open once the area is clear.

The gang factions you'll encounter are random and will not be set, it's best to use different elements, depending on who you're facing. Use fire against The Burnt Ends, corrosive & shield vs. CryptoSec, and radiation or corrosive vs. The Perpetrators.

There will be a mini-boss at the front door. This is random and isn't set, so make sure to bring weapons with different elements to defeat the mini-boss easily.

Fountain Piece Location Is Not Set

Once you reach the area where you'll find the missing fountain piece, you'll have to clear it out of all enemies. This triggers the appearance of the area's mini-boss.

Mini-Boss Will Appear In Area

Another mini-boss will appear once the area is cleared of all enemies. This, once again, is not set and random so make use of a variety of weapons to deal heavy damage.

After jumping down the fountain path and heading deeper into the mansion, you'll come face-to-face with the cartel boss, Joey Ultraviolet.

Defeat Enemies Before Joey Jumps Down

Joey will be watching from above at the beginning of the fight. You need to defeat all enemies in the arena before he jumps down to face you.

When Joey finally jumps down to fight you, he'll be accompanied by 2 mini-bosses. Make sure to take them both down first to remove Joey's invulnerability.

Use Corrosive & Fire Weapons On Joey

Once you've removed Joey's invulnerability shield, shoot him down with corrosive or fire-based weapons. These deal the most damage to his HP.

Joey has a lot of short-ranged attacks that can do you in when you're too close. Fire at range to deal the most damage to him while keeping yourself safe.

Dodge To Side To Avoid Charge Attack

Joey will do a charge attack that heads straight toward you. To dodge, side step and avoid taking damage.

Watch Out For Arena Lasers

The arena will have beams of lasers that will appear in random arrangements. These deal heavy damage so be sure to stay away from them.

The arena will also have corrosive pools on the floor that will deal damage-over-time when you walk over them. Keep clear of them to maintain your HP.

During the event you have a chance to get event related cosmetic rewards by completing Event Challenges. These challenges and rewards can only be earned during the Revenge of the Cartels Halloween Event.

Complete challenges to unlock limited-time cosmetic items! Remember, you can only do them while the event is active!

Revenge of the Cartels Event Overview

Eridium cartels, neon lights, and a whole new scenery, Revenge of the Cartels will take you on a wild ride to save Maurice from Joey Ultraviolet and his gang of operatives.

Released Along With Mayhem 2.0

Want a challenge? Try out the new Mayhem 2.0 as you play through the Revenge of the Cartels. Remember, you get better loot when playing on Mayhem Mode!

Check Out the Mayhem Mode Guide

Revenge of the Cartels Event Features

Villa Ultraviolet is described as an opulent hideout in a tropical paradise. Don't be fooled by the scenery though because this is the hideout of the notorious Joey Ultraviolet.

Similar to Halloween Event, new enemies will be introduced as part of the Revenge of the Cartels event. You will also meet these new enemies outside of Villa Ultraviolet.

As you go through the event quest, you will meet different enemies belonging to different gangs. Each have their own distinct appearances since each gang has their own theme.

Each gang has an underboss that you will need to defeat to get to Joey Ultraviolet, the main boss of the event. They will have their own pools of legendary weapons for you to farm!

Face Off Against Joey Ultraviolet

At the end of the event quest, you will face against the leader of the Eridium Cartel, Joey Ultraviolet. Do so and you will save Maurice from a life of debt.

Revenge of the Cartels - Rewards & Legendaries

Check Out All Legendary Weapons Here

Drops May Have New Anointed Skills