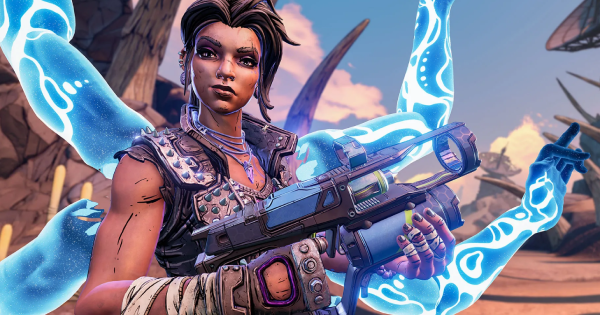 Learn all you need to know about Amara the Siren's skill tree in Borderlands 3! Featuring all Action Skills, Augments, notable Skills from each tree, all skill list & more, & more!!!

Gifted with mystical powers as one of the 6 sirens of the galaxy, Amara is able to summon ethereal fists to slam enemies or throw an astral projection of herself at will.

Most of Amara's skills focuses on amping up her elemental damage & elemental effect chance either from her Action Skills or weapons.

With skills that can easily attack multiple enemies at a time, Amara's especially effective when it comes to crowd control. Her Phasegrasp & Deliverance skills are notable for these.

Amara has multiple skills that put particular attention to her melee damage. She even has a skill that boosts her damage the closer she is to an enemy.

Notable Skills in Fist of the Elements Tree

The Tempest skill is a requirement for any player running an elemental build for Amara. Tempest increases her overall elemental damage, especially for her Shock damage.

A skill focused on survivability, Sustainment will apply Life Steal to Amara, giving her health equivalent to a percentage of the elemental damage she is making.

Another elemental focused skill, Anima increases the Amara's elemental status damage and prolongs it at the same time.

The main feature of the Phasegrasp is the ability to hold down in place an enemy, giving players an easier target. This is great for taking down mobile enemies or preventing enemies from attacking you.

Utilize with a Longer Skill Duration

Make the best out of this skill by also investing points in skills that extend the duration of your Action Skill. The longer your Action Skill is, the more likely The Eternal Fist can grasp on to targets.

With more than 2 people attacking linked targets, the damage across all linked targets will be greatly multiplied. Although this is still effective in single player, it becomes increasingly more valuable when playing in groups.

The Allure Action Skill Effect will pull in enemies to where the Fist Over Matter is and placing them in the damage radius of the giant fists.

The Do Harm tree will grant a stack of Rush for every enemy that Amara has killed. Every stack of Rush will be consumed when Amara uses her Action Skill, granting an increase in damage.

Although in the Mystical Assault Tree, Ascendant affects all Action Skill Augments across each Skill Tree. This increases all of their stats, no matter which one is active.

Avatar will allow players to use Amara's Action Skill once again even while its in cooldown. To put it simply, you'll be able to use your Action Skill twice within a single cooldwon.

Use Against Enemies Grouped Together

The Phasecast Action Skill can hit multiple targets. Take advantage of this by using it against enemies lined up or are in a tight spot to do maximum damage.

With this skill, aim to hit as many enemies as possible. This can easily be done by using Singularity grenades that pulls enemies to a single spot.

Singularity Grenades are able to pull together enemies within its reach. When they're in the same place, it will make it easier to hit multiple targets and increase your damage!

Strong Against Bosses with Mooks

Aim your Astral Projection to a singular target that you want to damage the most. Bosses with mooks hanging around will be damaged more highly with this Action Skill

With Guardian Angel, Amara will immediately get out of Fight for Your Life even without killing an enemy. It will also regenerate her health and create an elemental nova around her.

Blitz changes Amara's melee into a charging melee strike. If she hits kills an enemy with Blitz, it's cooldown will reset immediately.

Phaseslam can easily close the distance between Amara and her target. Additionally, it can damage multiple enemies at a time, making it deadly against grouped up enemies.

Use to Deter Charging Enemies

Fracture can easily prevent melee enemies from heading straight for Amera. Damage them with the Action Skill then finish them off your weapons.

Make the best out of this skill by focusing on a single target at a time. This best used for bosses and other higher difficulty enemies instead of wasting it on mooks.

All Fist of the Elements Skills & Effect

Some enemies are immune to being Grasped and instantly take damage instead.

Convert a portion of damage dealt by Amara's weapons into her Action Skill Element.

Whenever Amara applies a Status Effect to an enemy, it has a chance to spread to a nearby enemy.

Fire wants to be free.

Whenever the Grasped enemy is killed, a new fist seeks out and Grasps a new target.

Amara's Gun Damage is increased for a few seconds after an enemy is Grasped.

Whenever any player kills a Grasped enemy, their current weapon is instantly reloaded.

Amara’s Action Skill creates a singularity that pulls in enemies.

Don't everybody get up at once.

Amara's bullets that damage enemies have a chance to ricochet and deal decreased damage to other nearby enemies. Ricochet Chance and Damage are increased if the target is currently affected by Phasegrasp or Stillness of Mind.

Whenever Amara triggers an elemental effect on an enemy, when that enemy dies that enemy explodes, dealing her attuned element damage along with any other element that is currently inflicted upon that enemy. This skill has a short cooldown.

After Grasping the targeted enemy, large fists appear and constantly smash the area, dealing damage to nearby enemies.

Amara gains Life Steal whenever she deals Elemental Damage with her weapon.

Whenever Amara applies a Status Effect to an enemy, she gains a chance to randomly Electrocute, Ignite, or Melt that enemy.

For every stack of Rush consumed, Amara's Status Effect Chance is temporarily increased.

Amara gains increased Reload Speed for every stack of Rush. After consuming Rush stacks, this bonus is increased for a few seconds.

A portion of all damage dealt by Amara's Action Skill is returned to her or a nearby ally as health.

Whenever Amara’s Astral Projection damages an enemy or object, it releases homing Elemental Projectiles that trigger her Action Skill Elemental Effect on enemies.

Enemies damaged by Amara's Action Skill become phaselocked until they are damaged or the duration ends. However, Action Skill Cooldown is increased.

If Amara targets an enemy with Phasegrasp, enemies near the Grasped target are phaselocked.

Astral Projection deals increased damage for every enemy it hits.

Enemies take increased damage from all sources for a few seconds after being damaged by Amara's Action Skill.

Amara gains increased Gun Damage. This effect is increased after she activates her action skill for a few seconds.

When Amara kills an enemy with a Gun or Action Skill, she creates a homing projectile that seeks out a new enemy dealing her Action Skill Elemental Damage.

Any Overkill Damage is added to the projectile's damage.

Amara sends forward an Astral Projection of herself. When it hits a target, it explodes, damaging all nearby enemies.

Amara's Action Skill can be activated while it's cooling down. This skill may only be used once per completed cooldown.

Additionally, if Action Skill kills an enemy, it refunds half of her Rush stacks.

Amara leaps into the air and Slams the ground, dealing damage to all nearby enemies and knocking them up.

Amara's weapon shots deal Bonus Damage based on the distance to her target. The closer the target, the greater the bonus.

Amara constantly regenerates health. The lower her health, the more powerful the regeneration.

After using an Action Skill, this bonus is doubled for a few seconds.

For a few seconds after using her Action Skill, Amara's arms remain active and grant her Damage Reduction.

Amara summons a line of fists that erupt from the ground, dealing damage to enemies in front of Amara.

Amara’s Action Skill now creates a Nova when it damages enemies, dealing damage to all nearby enemies.

Amara leaps into the air and shoots an Elemental Beam below her briefly, followed by a Slam.

Whenever an enemy damages Amara, she automatically throws an energy orb back at them, dealing Action Skill Elemental Damage. This skill has a short cooldown.

Whenever Amara deals melee damage to an enemy, she gains increased Action Skill Damage and increased Gun Damage for a few seconds.

If Amara targets an enemy with Phasegrasp, enemies near the Grasped target are confused as well.

If a Blitz melee attack kills an enemy, Blitz’s cooldown is immediately reset.