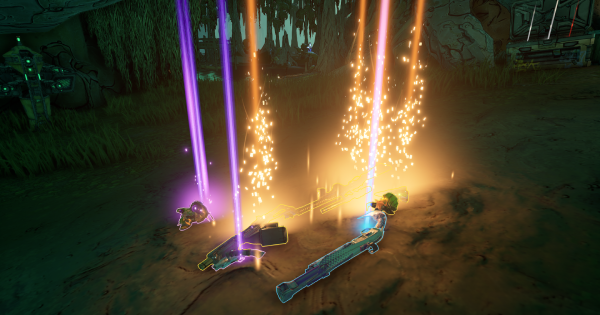 Read this guide to learn about recommended locations, tips, and methods for legendary and rare loot farming in Borderlands 3. Includes VIP Tower, Chupacabratch, and Graveward locations!!!

New bosses, a legendary weapon, & item loot pools were introduced in the Handsome Jackpot DLC. Read all about them here!

Requires You to Reach the Final Boss of Handsome Jackpot DLC

In order to use this method, you will need to have the Handsome Jackpot paid DLC and reach the final boss of the DLC. You will farm the second to last boss in this DLC for this method.

How to Farm the Boss Guide

Prior to fighting the boss, you must take out the Loader Bots that appear in the entrance court of the VIP Tower. Once all bots are cleared, the boss will Spawn.

Upon clearing the court, the boss will spawn alongside few back up Loader Bots. Since boss himself is not a big threat, you can easily defeat him with by focusing fire. Note that he is equipped with a beefy shield.

After looting the boss, simply fast travel your way back to the nearest Fast Travel Station for the boss to respawn. This time, the boss will spawn immediately & you will not need to clear the entrance again.

Step 4. Return to the Entrance for Boss to Respawn

Unlike other boss farming methods, you do not need to return to the Title screen after each kill for this Farm. You may repeat this method as much as you wish.

We are currently testing more areas and will update info regarding recommended locations to farm legendaries.

The Chupacabratch received a significant nerf to its drop rate with the Sept. 19 Hotfix. The previously always spawning Loot Tink in Jakobs Estate has also been removed.

The Chupacabratch has gotten a fix which recalibrates this enemy's dropped loot. Previously, the Chupacabratch drops higher-tiered loot. However, with this patch, the rate has been reduced.

Farm Legendaries In TVHM Instead

Farming legendary loot isn't as important in your first run-through of Borderlands 3. This is because weapons are scaled to your current level. Therefore, it's best to farm legendaries in TVHM, where your character levels are higher and your chances of receiving high tier loot is larger.

Check Out the Vault After Defeating It

Don't forget to check out the Vault once you defeat the Graveward. There may be legendary loot waiting for you in the chests. Keep in mind that the Vault's chests may remain opened even if you reload the game.

Head To Waypoint In Athenas

After heading to Athenas, fast travel to the Athenas - Drop Pod. Follow the waypoint indicated in the image above to find the Chupacabratch. You can ignore enemies to get there faster.

In the fight, shoot at the mouth of the Chupacabratch to deal critical damage. Avoid getting too close to it so you won't get attacked.

Play offline to revert these patches, it's so much better to farm all the gear you need this way (offline RNG is also better). Apart from Legendary Cl*** Mods, there really isn't much incentive to play online rn.

You meant thanks Gearbox for fixing this boss right?
Main purpose of the game is to find legendaries. What's the point if you have all of them in less than 2 weeks?
Legendaries are everything but legendaries if it's easier to drop them than common weapons.

Thanks Gearbox for ruining a fun farming run. Its almost like utubers need to stop showing us fun tips...because Gearbox will nerf it or patch it.

It was fixed with a hot patch. A hot patch downloads and installs every time you start the game. The work around is to play offline.