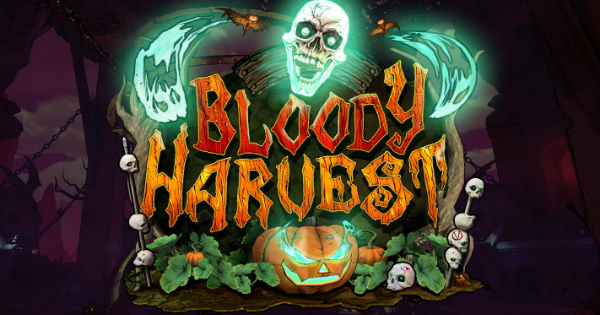 Find out everything to know about the new halloween event "Bloody Harvest" of Borderlands 3! Check out the event walkthrough, details, release date, and features and rewards!!!

Look for Enemies with Colored Aura

Haunted Enemies are denoted by a ghostly glow around them. Defeat them and a Ghost would be released for you to defeat. They drop both loot and Hecktoplasm!

3 different types of Ghosts may spawn depending on the aura on the enemies; regular Green Ghosts which charges into you for kamikaze attack, Red Badass Ghosts attacking with projectiles, and rare Yellow Loot Ghosts filled with goodies.

Use Electric Weapon Against Undead Maliwan

Heck is populated with undead Maliwan soldiers, which are fully geared with shields. Use electric weapons to make quick work of them!

You will come across badass variants of enemies named Keymasters while fighting hordes of ghouls. Defeating these Keymasters will open a path that leads deeper into Heck.

You will come across a suspicious colored Skull ornament on the wall around midway through the map. Turn back check the color of the jack-o-lanterns from the previous room from left to right, interact with the skulls in that order to open a secret loot room!

The very much dead Captain Traunt seeks his revenge as Captain Haunt in the deepest reach of Heck. Be light footed to avoid his jack-o-lanterns and Terror attacks.

Stay on the move when Haunt lobs a large flaming jack-o-lanterns. These ablaze the floor upon impact and will deal damage over time.

After dealing few damage to Haunt, he will shield himself in impenetrable shield. Destroy the aura spurting Shielding Phylactery spawning around the arena to remove his Barrier.

During the event you have a chance to get event related cosmetic rewards by completing Event Challenges. These challenges and rewards can only be earned during the Bloody Harvest Halloween Event.

Check Out All Character Skin & Heads

Get ready for further chaos because Halloween themed event is coming to the world of Borderlands 3! It's expected to launch on October 29 as the finale of Borderlands Anniversary Celebration.

The Bloody Harvest event is the first event and it is not exclusive. Anyone who plays Borderlands 3 can join the event as long as one has reached Sanctuary spaceship in the game.

Get a first look at the spooky Bloody Harvest event coming to #Borderlands3 this October in the first episode of The Borderlands Show!

As a start of the event, you will encounter Haunted enemies. They should be ghosts, aggressive apparitions but there may be others.

Haunted enemies induce terro debuff, which partially shrouds your vision in a mysterious mist and weakens your gun handling, accuracy, and spread.

Captain Traunt is a boss from the Borderlands 3, a gigantic Maliwan heavy soldier with some killer elemental attacks. In the event, he will be a bone-headed Captain Haunt, the event boss. Boo the Captain Haunt and send him to a casket!

Check Out Who Is Captain Traunt Here

Throughout the event you will get Hecktoplasm and this can be turned into Maurice, your scaly new pal who's taken residence aboard Sanctuary III.

During the event, there would be legendary items to loot. They will be with the new terror mechanic.

Check Out All Legendary Weapons Here

Drops May Have Terror-based Modifiers

Drops from enemies during the event could have Terror-based modifiers. Having those items to prove your participation to the event!

One should be warned....there is no going back until Captain Traunt is defeated. It was very irritating going up against this Boss as I am a single player.