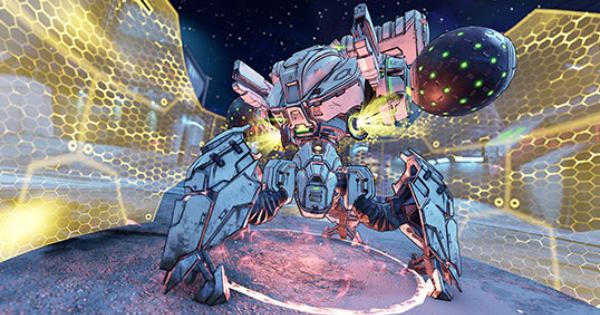 Respawns are Limited to Specific Areas

Respawn is limited in the Takedown at Maliwan's Blacksite. Dying in the first half will only let you respawn if your team beats the Valkyrie Squad. Dying in the second half will not allow you to respawn until they beat Wotan the Invincible.

Can Still Get Reward from Wotan

If you happen to have died in the middle of the fight or before Wotan, you don't need worry because you can still get the rewards if your teammates manage to beat them. You'll respawn in the Arena where you can get the loot!

Mission Can be Launched in Matchmake

You can skip through Steps 1 - 3 by simply starting the game on Matchmake. This is only available for players who are not playing in a full team.

Recommended to be Lvl 50 & Fully Geared

This mission is challenging for a reason. You will need to be level 50 & fully geared to be able to survive against the hordes of enemies. Not to mention Wotan the Invincible who awaits you at the end of the mission.

A Shock Weapon is a Must

Almost if not all enemies you face in Maliwan's Blacksite are shielded so remember to bring a shock weapon. This will help you bring down enemy shields faster.

Go Behind Cover if You're in FFYL

Help your teammates to get you back up by crawling behind cover if you find yourself in Fight For Your Life. This will ensure that your teammate won't get damaged while helping you up.

Throughout the Facility, you'll face a ton of badasses and normal mooks. Take care of bosses first as they're a bigger threat compared to the regular mooks.

Remember to always refill your ammo from any of the Vending Machines you find in the facility. They're pretty spread out and are near checkpoints most of the time.

Be Careful of Ledges in Valkyrie Fight

You may not notice it immediately, but the platform you are in during the Valkyrie fight has ledges. Fall down and you'll be out of the fight so check where you're stepping.

Focus on One Valkyrie at a Time

Spreading your fire between the Valkyries will prolong the fight. Just focus on one of them at a time or whichever is unshielded to bring the fight to a close.

The Reaper Valkyrie is a melee focused enemy. Better to stay away and shoot it from a distance so it can't damage you.

Check Out How to Beat Wotan the Invincible

Make Sure to Have Gear, Ammo before Dropping Down

Double check if you have everything in your loadout and if you have enough ammo before jumping down to the Arena. Once you're there, it's kind of hard to change loadouts.

The first of the Takedown content updates, Takedown at Maliwan's Blacksite will introduce a new area where you finally finish off the Maliwan corporation. This will end in an epic battle with the BL3's first raid boss, Wotan the Invincible.

Will be Available Permanently

Unlike the holiday events, Takedowns will be available from that point on permanently. It won't be a limited-time event so players won't need to rush through it.

Get a first look at #Borderlands3's upcoming "Takedown at Maliwan's Blacksite" revealed during today's episode of The Borderlands Show!

The Takedown at Maliwan's Blacksite is designed to be a multiplayer quest thanks to its difficulty. Playing this quest while below Level 50 can cause early deaths so equip the best gear with your friends before taking it on.

This is no ordinary battle and Maliwan is pulling out all the stops. Maliwan's elite line of defense includes tons of soldiers, SpecOps Maliwan squads, and 3 bosses!

A staple of the series, a Raid Boss will finally be introduced in Borderlands 3 with the Takedown at Maliwan's Blacksite. Woton the Invincible is a Maliwan robotic behemoth that fires missiles barrages at its enemies!

Check Out How to Beat Wotan the Invincible

Taking on the Takedown at Maliwan's Blacksite is worth it for the rewards you can get. Unlock exclusive skins and heads and some of the best shields in the game that you can't find from anywhere else.