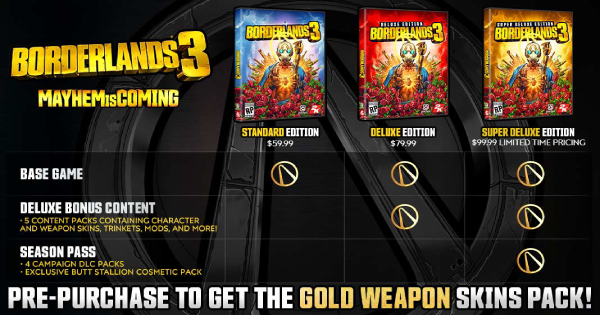 Which Edition of Borderlands 3 Should You Get?

The Standard Edition is recommended for players new to the franchise. This will include the base game along with some pre-order bonuses. It is available in both physical and digital copies.

Deluxe Edition For Fans of the Series

Fans of the Borderlands series should consider getting the Deluxe edition as it also contains XP & Loot Drop Mods, and several cosmetic packs that allow you to change up the look of your Vault Hunter, weapons, and even the UI!

Aside from the base game and cosmetic packs, the Super Deluxe Edition also includes the Season Pass which brings 4 campaign DLC! Perfect for players who will want to play the game for a long time.

Which Edition Are You Getting?

Players who opted to pre-purchase the game will automatically receive the Gold Weapon Skins Pack. This cosmetic pack includes a gold weapon trinket, and gold weapon skins that are applicable to all of the guns in the game!

The Base Game of Borderlands 3

The Standard Edition of Borderlands 3 is the basic package that does not include any bonuses. This edition comes with a single copy of the full game, and a pre-order bonus if it was pre-purchased.

The Deluxe Edition of Borderlands 3 will come with 5 different cosmetic packs for players to use, along with the XP & Loot Drop Boost Mods! These come along with any pre-order bonuses if the game was pre-purchased.

where you get the game for that price ?