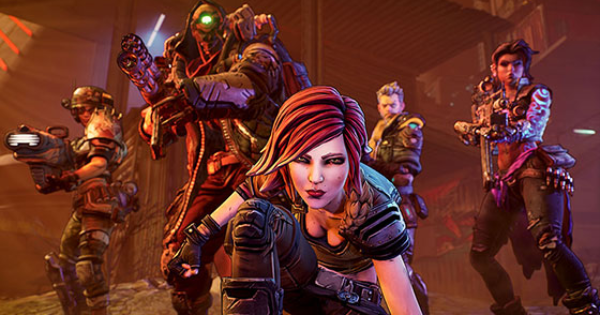 New to Borderlands 3? Learn everything a beginner must know in this guide! This includes tips for looting, gear, weapons, leveling, combat, and more!!!

Which Character Should I Choose?

Each of the playable Vault Hunters have their merits when it comes to skills and gameplay. Choosing your Vault Hunter will dictate your general playstyle for the rest of the game.

Check Out Points of No Return Here

Check Out the Amara Skills Here

Amara has a multitude of skills that affect multiple enemies at a time. From being able to create a singularity pulse or unleash homing projectiles, she is capable of dishing out enough damage to clear out mobs of enemies.

No matter which Elemental Damage, Amara has the skills to further raise its damage & increase its elemental status effect chance. There are some passive skills that heal her when she does elemental damage.

Summon a Tank at Will

Moze's tank is both an offensive and defensive help, allowing players to stay alive while still doing damage. Her skills are pretty easy to get as they're all connected to her mech.

All Character Tree - Build & OverviewCheck Out Recommended Characters To Play!

Leveling Up & its Benefits

Increasing your level is essential to surviving against battles! From unlocking Skill Points to increasing Weapon stats, leveling up is a must.

How to Level Up Fast

Most bosses will have a checkpoint (the New-U Station) prior to entering their arena. By repeatedly defeating the boss and exiting the game to the menu, you will be able to quickly farm the boss of your choice to rack up some quick XP.

Side Quests are optional quests separate from the Main Story. They give a good chunk of XP as a reward to completing them so try to do as much as you can before progressing the story.

Defeat All Enemies You Encounter

Whether it's random bandits or beasts you find on the road, take a few seconds to take them down and XP for your troubles. You can make use of your vehicle to defeat them to make it easier for you.

Every area has special regional challenges that when cleared will give XP as rewards. Challenges can include going to certain location or discovering special items.

Learn How to Level Up Fast Here

What Happens When You Level Up?

Every time you level up, you will receive a Skill Point which you can use to unlock skills. No matter how high your level goes, it will remain 1 Skill Point per new level.

Stronger Loot Based on Your Level

Loot drops based on your level and the higher a weapon and gear level is, the better its stats will be. You'll notice that a level 10 Assault Rifle of the same brand will have lower stats than an identical Level 12 one.

Progress Through the Story

Once you level up, you'll be able to take on harder story missions. Although you're free to try a mission no matter the level difference, it's recommended to be close to a suggested mission level to make it better.

Have Different Types of Weapons

Don't limit your loadout to a single weapon type! This will greatly affect your ammo consumption in the long run and be unable to use different weapons during fights.

Crouch and Hide Behind Cover

Take advantage of walls and other structures to save yourself from enemy gunfire. Standing out in the open is a death sentence as multiple enemies can target you all at once.

Elemental Damage does more damage against certain enemies. Besides having an elemental weapon, knowing which enemy to use it for is a great advantage when in battle.

What is Fight For Your Life?

Defeat any enemy while you're downed or in "Fight For Your Life" to get a second chance to rejoin the fight! If you fail to do so, you'll die and have to respawn at the nearest New-U Station.

Each Respawn will Cost 7% of Total Money

Every time you respawn after dying, 7% of your total money will be removed as payment by the New-U Station. The amount it takes increases the more money you have.

What to Do When You Can't Beat A Boss

A difference in level makes a lot of difference when it comes to boss fights. Try to get as close to the level of the enemy before fighting it. If it has a skull near its name, its a warning that you're greatly outleveled.

Better weapons and gear can also turn the battle to your favor. Higher capacity shields will raise your survivability while high damage guns will take down the boss' health faster.

Every enemy has an elemental weakness to them. Bring a weapon that corresponds to that weakness to deal even more damage to them.

What are Badass Enemies?

Badass Enemies are like mini bosses in Borderlands 3. Although they don't have as much damage or health as bosses, they still pose a great threat to unprepared Vault Hunters.

Taking down Badasses are hard, but they're worth it! Each of them has a chance of dropping great loot, including weapons, shields, and more!

You're free to choose whatever type of weapon you want with you. Each of them has their pros and cons depending on the type of gameplay you want to do.

There are some weapons that can deal elemental damage and apply elemental status effects to enemies when used. Some weapons only spawn in one element, while others can spawn as any of them.

Protect Yourself with Shields

Shields are a must as its your first line of defense against enemy attacks. A good stat to look out for shields are large shield capacity and low recharge delay.

Make Use of Grenade Mods

Grenade Mods change the way your Grenade works when you use it. Some of them can explode and summon more grenades while others can even create a nova blast around them.

Use Class Mods & Artifacts when Available

Upon unlocking Class Mods and Artifacts in game, make sure to use whatever you had immediately. This is not available at the start of the game and requires story progression.

The Rarity of a weapon determines its stats and drop rate. The higher the rarity, the more powerful it is, but the less likely it is to drop from enemies.

Rarity Should Not be a Basis for Loadouts

Don't keep an outleveled weapon even if it's a Legendary one. It will be outdamage and outclassed within 10 levels to it's not worth holding on to.

Special Abilities Depending on Manufacturer

From weapons to equipment, every manufacture have a specialty that it applies to their products. Weapons can sprout legs while shields can multiply health by the thousands!

How to Increase Loadout Slots

You can only unlock more Loadout Slots by getting to certain levels. Besides that, there's no way to increasing the number of Loadout Slots.

Class Mods are a type of equipment that provides Status Buffs and increases the rank of specific Skill Point.

Each Vault Hunter get their own type of Class Mod which only they can equip. It is possible for players to pick up a Class Mod that's not for their character.

Each playable Vault Hunter has a set of skills and skill trees that are unique to every one of them. These provide new abilities, buffs, and more depending on which skills you use in your build.

There three types of skills that you can unlock in your skill tree. Action Skill Points are active skills, Passive Abilities are passives, and Augment Skills buffs different skills.

Action Skills and Passive Abilities can be activated by spending Skill Points on them. However, unlocking Skills requires progression through Skill Trees.

Whether you want to change your build or made a wrong decision with Skill Points, you can respec them all through the Quick Change Station. Every respec will cost money though.

There is no one build for Vault Hunters. You can choose to mix and match skills depending on your playstyle and targeted build. Go tank or pure offense, it's up to you!

Get Loot from Green-Lighted Storages

Going around different areas you may notice storages with green light on them. This indicates that they can opened to get loot!

There are chests found in the game that give specific loot. Ammo boxes will only give ammo, while larger chests can give weapons, shields, grenade mods, and more!

Especially after a boss fight, scour the area for any Red Treasure Chests. These chests contain some of the best loot in the game, including Legendary weapons if you're lucky.

If you're short on any gear, there are Vending Machines found around the worlds for you to buy from. Ammo, health, weapons, and shields are just some items you can purchase from them.

How Do I Drop Items

You can clear your inventory space by holding the [X] when selecting a gear to drop it. If you want to earn some money, you can also sell it instead.

Golden Keys and SHIFT Codes can give you loot and golden keys you can use to open the locked Treasure Box in Sanctuary. Redeeming the codes will require a SHIFT Account.

Can Now Fast Travel from Anywhere

Stuck in the middle of nowhere? You can chose to fast travel to a Fast Travel Station if you want to. This can be done through your Map.

Fast Travel Out Of Combat

Having a hard time fighting your enemies? Regroup and restock by using Fast Travel during a fight. Just open your ECHO menu and select a place where you want to go to and you're out!

Going beyond Pandaro, you can visit different planets both for story missions and side missions. Take note that each planet has its own hazards that you may have to face.

Get Around Quicker with Vehicles

If a Fast Travel Station is unavailable, you can digistruct a vehicle to travel across maps. Vehicles are entirely custmozable so you can create one to your liking.

Unlocking Vehicle Parts will require players to find vehicles with these special parts, stealing them, and taking them to Ellie's Garage! Once a part has been unlocked, it will be permanently available.