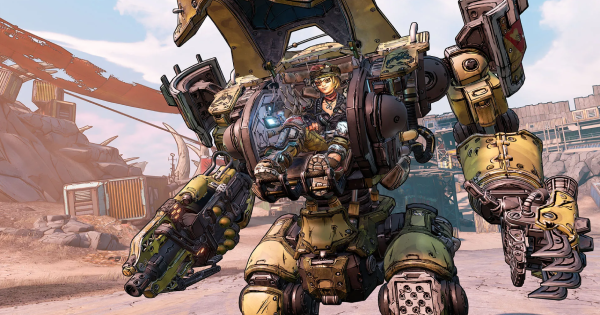 Learn all you need to know about Moze the Gunner's skill tree in Borderlands 3! Featuring all Action Skills, Augments, notable Skills from each tree, & all skills list!!!

Moze is a former Vladof soldier who specializes in mechanized combat. She is able to digistruct her Iron Bear Mech, which helps her rain down heavy firepower on her enemies.

Moze's Iron Bear suit has multiple hardpoints to attack different weapons and firepower. She can choose from railguns, miniguns, flamethrowers, and more to augment how she fights on the field.

Skills Allow You To Take The Frontline

Moze's skills focus on getting her as tanky as possible, increase her splash damage, and regenerates her ammo. This helps her stick to the frontlines and deal with the endless hordes of enemies coming at you!

Notable Skills in Shield of Retribution

As long as Moze's shields are active, she has increased gun damage, making her hit harder against enemies as long as her shield is active.

Full Can of Whoop-Ass

A great way to immediately recharge your shields. This skill also works great in a team setup, as using your action skill can instantly give allies the sustain they need.

A Kill Skill that gives Moze a stack of increased Gun Damage and an increased Maximum Skill. There is no max stack, meaning that you will be able to have increased offense and defense indefinitely.

The Railgun is great for sniping enemies and quickly shredding their shields. It has long range capabilities, meaning that you will be able to dispatch targets from far away with this weapon.|

Get Up Close & Personal With Enemies

The Bear Fists are designed for close-range combat. With these equipped, you can get close to enemies and pummel them to death! No need to worry about your shields as the skill tree is focused on beefing up your shields so you can take the hits!

This will increase the Duration of your Iron Bear Mech as it drains less fuel and increases your fuel tanks whenever you kill an enemy. Note that this skill has diminishing returns.

Exiting the Iron Bear will turn it into an automatic killing machine! It will temporarily stay deployed and continue fighting enemies. It will then self-destruct right before the skill ends.

You will have a slight advantage in Fight For Your Life mode as you can throw grenades. This will make it easier to gain a Second Wind as grenades deal damage over an area of effect!

This semi-automatic grenade launcher allows you to deal tons of damage to an area. The Skill Augments allow you to increase your total DPS by increasing damage, fire rate, or even allow you to fire a singularity grenade!

Rapid Fire Enemies To The Ground

You will be able to launch a volley of rockets to deal high damage against enemies. These rockets will also deal damage over an area of effect, letting you control large crowds of enemies.

Will let you deal additional Incendiary Damage, and will prevent you from consuming any of your ammo. Allowing you to get more shots off against enemies!

You will be able to sprint and shoot at the same time, allowing you to reposition faster and deal damage against enemies.

Some For The Road

Exiting Iron Bear will temporarily give you infinite ammo. Perfect for when you need to finish up the straggler enemies. Best paired with a gun that has a high fire rate!

Make your enemies eat loads of lead with the Minigun! The rapid fire allows you to deal a ton of damage to enemies. Despite this, make sure to avoid overheating this weapon as it can render it inoperable!

The Salamander has infinite ammo, allowing you to deal massive Incendiary damage to enemies. However, this is best paired with skills that lessen fuel drain to maximize its benefits.

Whenever Moze reloads, she loses a small portion of her health and grants additional Incendiary Damage to her and her allies’ rounds for a few seconds.

The shield deactivates if it sustains too much damage, reactivating after a short cooldown.

While Moze’s shields are active, she gains Damage Reduction and increased Gun Damage.

Kill Skill. Killing an enemy grants Moze a stack of Drowning in Brass.

For each stack of Drowning in Brass, Moze’s Fire Rate is reduced, but Gun Damage is increased for both her and her allies.

A portion of Moze’s health is Reserved and cannot be restored, but her Maximum Shield is increased by the same amount.

Moze’s Maximum Shield is increased, and she gains resistance to Shock Damage.

The Bear Fist is a pneumatic-driven fist that deals massive damage to a single target at close range.

When Railgun hits an enemy, it chains to nearby enemies, dealing reduced Shock Damage to more targets.

Full Can of Whoop-Ass

Whenever Bear Fist hits an enemy, it deals random bonus Elemental Damage to that enemy and all enemies nearby.

Railgun now fires a specialty round that deals reduced damage and explodes after a short delay.

Railgun shots have reduced Fuel Drain and the Magazine Size is increased.

Behind The Iron Curtain

Moze’s Gun Damage is increased depending on how low her health is. The lower her health, the greater the increase.

Instead of punching, Bear Fist now launches its fist forward and grabs enemies at greatly increased range, dealing Shock Damage and pulling them back to Bear Fist.

There is no stack limit.

Whenever Moze’s shield is fully depleted, she instantly restores a portion of her shield, and her Gun Damage is increased for a short time.

This skill can only trigger after Moze’s shields have fully recharged.

The V-35 is a semi-automatic grenade launcher. Its grenades are not affected by Moze’s equipped grenade mod.

Fire In The Skag Den

Killing an enemy while Iron Bear is active increases Fuel. This skill has diminishing returns.

Whenever Moze deals Splash Damage, there is a chance to add ammo to her currently equipped weapon’s magazine, with a smaller chance to return a grenade.

All Splash Damage dealt by Moze has a chance to double in size.

The Vanquisher Rocket Pod is a rocket launcher capable of rapid-firing volleys of unguided explosive rockets.

Occasionally, the V-35 fires a Singularity Grenade that pulls in nearby enemies before exploding.

After Moze exits Iron Bear, it will remain deployed in place for a short time.

While Auto Bear remains active, it will target and attack nearby enemies until its duration ends, then it will charge at an enemy and self-destruct.

The Vanquisher Rocket Pod now fires homing rockets and has increased Reload Speed. Hold down F and aim at enemies to designate up to 6 targets. Releasing Fire Button launches a volley of homing rockets at the designated targets.

The V-35’s Reload Speed is greatly increased and it now fires a 5-round burst.

The now fires homing rockets and has increased Reload Speed. Hold down F and aim at enemies to designate up to 6 targets. Releasing Fire Button launches a volley of homing rockets at the designated targets.

Whenever Moze damages an enemy with a thrown grenade, for every enemy hit, she restores a portion of her missing health.

Why Can't I Carry All These Grenades?

Moze gains the ability to throw grenades while in Fight For Your Life. If she threw a grenade before gaining Second Wind, a grenade is refunded.

Instead of a volley of conventional rockets, the Vanquisher Rocket Pod launches a single rocket with a nuclear warhead, dealing massive Radiation Damage.

Whenever Moze deals Gun Damage, there is a chance of a secondary explosion centered on the target.

The Minigun is capable of sustained rapid fire. Firing for long periods causes the Minigun to overheat, rendering it inoperable for a few seconds.

Adds a manned turret to the back of Iron Bear.

Moze's currently equipped weapon gains a stacking bonus to Magazine Size and Decreased Heat Per Shot for every piece of equipped gear that has a matching manufacturer.

Let Off Some Steam

Minigun deals more damage as heat increases, and can be fired for longer before overheating.

After Moze scores a Critical Hit, she regenerates ammo for a few seconds.

The Salamander is a flamethrower that deals Incendiary Damage to enemies at close range.

Though the Salamander has infinite ammo, it drains Fuel with use.

Moze can sprint and shoot at the same time.

Equipping two of the same Weapons on Iron Bear increases the damage they deal.

Some For the Road

Moze gains increased Gun Damage as her magazine empties. The less ammo there is remaining, the greater the increase.

If Moze has a COV gun equipped, she gains Gun Damage as her gun's heat increases.

The Salamander’s burst-fires 3 projectiles with increased Fuel Drain, the first of which leaves a large Incendiary area.