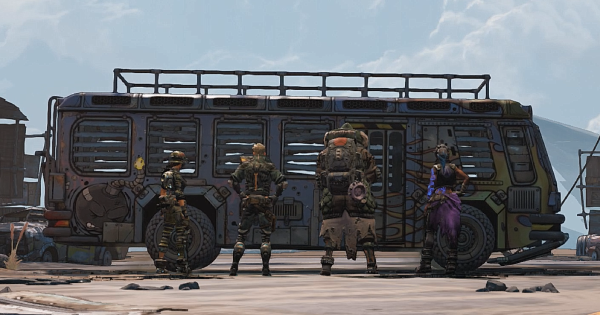 Find out all Vault Hunter Characters in Borderlands 3 with their best build & recommended characters to play. This includes BL3 quick guide of characters and their build, & more.

Gifted with mystical powers as one of the 6 only sirens in the galaxy, Amara is able to summon ethereal fists to slam enemies or throw an astral projection of herself at will.

As a member of the notorious Flynt family, Zane is a semi-retired corporate hitman who uses gadgets and trickery to get the upper hand in battle. Zane's arsenal is composed of a SNTNL drone, a Barrier Shield, and a Digi-Clone!

Moze is a former Vladof soldier who specializes in mechanized combat. She can digistruct her Iron Bear Mech, which allows her to rain down heavy firepower on her enemies.

A wandering robot with a band of loyal pets by their side, FL4K's no ordinary machine. They are capable of feats no ordinary human can do including opening rifts and going invisible at will.

Which Character Did You Choose?

Amara with Focus on Crowd Control

Amara is a flexible character that can either go for long-distance or face-to-face combats. Her Action Skills are easy to use and deploy with no added fuss.

Both her passive and active skills can increase Amara's ability to take on multiple enemies at a time. She even has Action Skills that release projectiles or create a singularity vacuum.

There are multiple skills in Amara's Skill Trees that greatly amps up her elemental damage and elemental status chance. This applies to all her weapons and to her Action Skill.

Call Out a Mech as Moze

What makes Moze unique is her ability to summon Iron Bear, a giant mech. She also has abilities that raises her attack even when she's out on the battlefield by herself.

Summoning Iron Bear will provide additional defense and offensive power to Moze. She can even raise up its damage by adding weapons, such as a flamethrower!

Moze's skills can increase her damage output greatly when using explosive weapons, including with rocket launchers. This is nice for players who may find it hard to aim at enemies.

Although FL4K has companions to join in battle, what makes them hard to use is the importance of Critical Shots with their skills. Not landing them is a loss to their high damage potential.

Call Forth Pets in Battle

Simple as a concept, but hard to execute. The pets can be buffed with skills that may complicate FL4K's build. This will also add another cooldown meter for players to take into account.

Tons of Skills with Emphasis on Critical Shots

FL4K's damage potential is greatly increased by the Critical Damage boost skills that they have. Without the right aiming capabilities, this cannot be utilized to its fullest

Although Zane's multitude of gadgets and action skills seem tempting, choosing him will have you keeping track of multiple gadgets to deploy. A bit complicated for someone new to the franchise.

More action skills are great, but with so many to deploy, it becomes impertinent for Zane players to know when to use them. They can't be used just because they're available. Time your skills to help you get out of pinches and defeat mobs of enemies easily!

The Clone is a good distraction, but getting the best out of it will require good positioning on the side of a Zane player. Placing a Clone randomly can end up with you right in the middle of a mob.