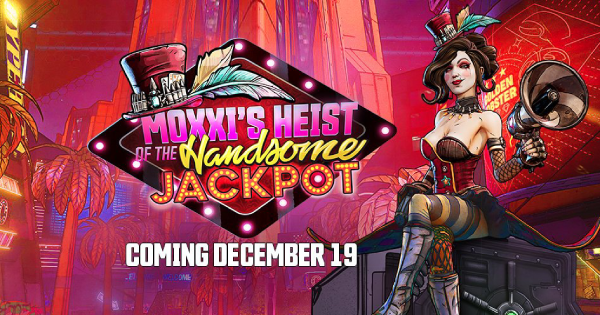 Find out everything about Borderland 3's first DLC - Moxxi's Heist of the Handsome Jackpot in this guide! This includes release date, walkthrough, new legendaries, and more!!!

First Paid DLC to be Released

Pull off the ultimate heist with Moxxi as she takes her final revenge against Handsome Jack in the Moxxi's Heist of the Handsome Jackpot DLC. This is the first of the 5 planned DLCs to be released for Borderlands 3.

Moxxi's Heist of the Handsome Jackpot is a paid DLC, requiring players to purchase it before they can play it. Season Pass owners will receive it naturally as part of the pack.

The DLC's campaign is independent, completely separate from the main mission of Borderlands 3. Work with Moxxi to get to the Handsome Jackpot's core and take control of the casino.

Check Out the DLC All Main Mission List Here

The Handsome Jackpot is a derelict space station built by Handsome Jack back when he was still alive and the president of Hyperion. It features slot machines, gold statues, and even a large hologram of Handsome Jack! What forgotten relic of Jack lurks, is yours to find out!

Face Off Against Different Enemies

The Handsome Jackpot DLC is filled with enemies who will try to stop you from completing your mission. This includes lunatic looters, casino machines, and even CL4P-TP's!

It's not a Hyperion location without Loader Bots. The iconic enemies from Borderlands 2 makes a return in the Handsome Jackpot. You'll be facing off against them and Constructors throughout the DLC.

This station is built for High rollers! There are many unique facilities in the Handsome Jack's casino; including a Black Jack loot box, a pricey VIP room which costs chunks of your wallet to unlock, angry slot machine bots, and many more!

During the Borderlands Show, it was announced that there would be new gear and weapons that will be added as part of the content. This should include new legendary weapons, shield, and other items!

Outfit Yourself with New Cosmetic Items

Dress up to the nines with the new cosmetic items found in Moxxi's Heist of the Handsome Jackpot. From unique headpieces to a solid gold outfit, show off just how much you're worth!

I can smile with my feelings