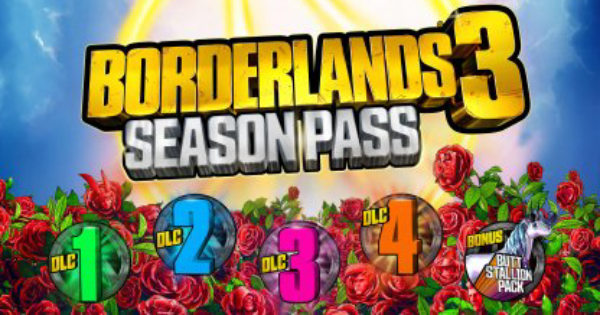 *A new DLC has been announced!

The third paid DLC is almost here! Bounty of Blood takes you to the frontier planet of Gehenna! Lace your stirrups, and be ready to fight the notorious Devil Riders gang!

You are cordially invited to the union of Sir Alistair Hammerlock, and Wainwright Jakobs! With a new story, enemies, and loot, the second campaign DLC takes you on a trip to the planet of Xylourgos to witness the beautiful union of these two souls!

Visit an All New Planet: Xylourgos

The wedding will take place on the all-new planet of Xylourgos! Take on cursed townfolk, bandits, and other bone-chilling eldritch creatures as you scramble and keep the wedding on track!

Plan the Party With Old Friends

Join returning Vault Hunter: Gaige as she plans the wedding with her trusty Deathtrap! Lend her a hand to make this wedding the best party ever!

Come home with some bling when you pull off the ultimate heist in Moxxi's Heist of the Handsome Jackpot DLC. This is the first of the 4 DLCs planned to be released for Borderlands 3.

Check Out Moxxi's Heist of the Handsome Jackpot Here

Work together with new characters to take full control of the Handsome Jackpot! New characters, new missions, and new enemies await in the DLC.

There are 4 DLCs planned to be released for Borderlands 3 after its release. Each one can be bought separately or bought as bulk with the Season Pass.

Guns, Love, and Tentacles is the second campaign DLC to be announced for the game. Releasing on March 26, travel to an all-new planet and participate in the wedding of Sir Hammerlock, and Wainwright Jakobs!

Aside from the second campaign DLC, Borderlands 3's official twitter page has also posted a roadmap for the game during spring! Expect free updates adding a mayhem mode 2.0, an event featuring cartels, and a new Eridian-themed takedown!

First DLC to be Released on December 19

Moxxi's Heist Of The Handsome Jackpot is set to be released on December 19, 2019. The DLC is a standalone and can be played without needing to finish the Main Story first.

DLC campaigns are downloadable contents which expand on the narrative and gameplay of the game. This adds new story missions to experience, new areas to explore, and maybe even loot for you to get!

Keep in mind that this DLC is not part of the base game, and will require you to pay real money to experience.

However, if you opted to buy the Season Pass or the Super Deluxe Edition, you will be able to get this DLC free-of-charge!