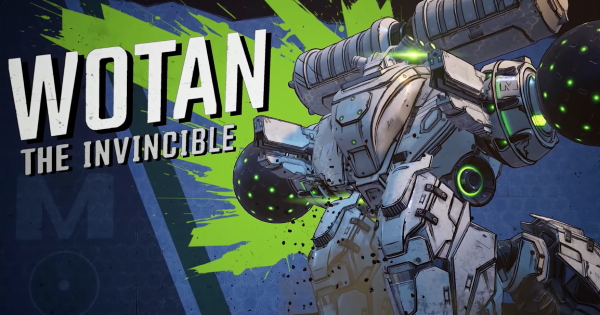 Borderlands 3 | BL3
Wotan the Invincible Raid Boss - How to Beat

Learn about Borderland 3's first Raid Boss - Wotan the Invincible. This includes info on the Takedown at Maliwan's Blacksite mission, location, how to beat him, rewards, & more!!!

Check Out the Takedown at Maliwan's Blacksite

What is Wotan the Invincible?

Wotan the Invincible is a mechanical powerhouse that Towers over other enemies in Maliwan's Blacksite. Behind its nearly invincible shields, Wotan fires a barrage of rockets at its enemies!

Introduced in Takedown at Maliwan's Blacksite

As part of the Takedown at Maliwan's Blacksite, Wotan the Invincible is the first Raid Boss introduced in Borderlands 3. It is the final boss of the whole Takedown on Maliwan Mission.

The fight against Wotan the Invincible features multiple phases. It is mostly based around bringing down the boss' shields & taking down its health with the Final Phase requiring you to finally beat it.

Like any other armored or robotic enemy, Wotan the Invincible is weak to corrosive damage. However since it is also shielded, having a shock weapon is also a must.

Recommended to be Lvl 50 & Fully Geared

Just getting to Wotan the Invincible is already hard thanks to Maliwan's elite line of defense. Having a full team of Level 50 Vault Hunter with full gears is a must to survive the whole Takedown.

Check Out How to Level Up Fast Here

Based on the announcement of the Takedown, new legendary items will be introduced as part of the update. Some of them should drop from Wotan the Invincible upon its defeat.

With how big and stationary Wotan is most of the time, the Cutsman can deal tons of damage to it. Just make sure to use the weapon when its shields are down or at shield openings or it won't work.

The Brainstormer will allow you to do damage to Wotan the Invincible even when he's behind his shields. The chain lightning will pass through its shield and attach to Wotan if you shoot any of the mooks around it.

The fight against Wotan the Invincible starts with him situated behind his shields. You'll need to bring down the shields, and then deal a specific amount of damage to start the next phase.

Notable Moves & How to Counter

Will Do the Same Moves Across the Fight

These 2 moves will be Wotan's main moves throughout the whole raid boss fight. Even during its last phase, it will still make use of these attacks.

Check Ground and Run Away from Missile Markers

Indicators on the floor will clue you in where the Missiles will land when Wotan uses the Missile Barrage. Run Away, jump, & slide to escape the missiles.

Hide Behind Cover to Stay Clear of Laser Shots

The Laser Shots are harder to escape since they travel faster than the Missiles. The best way to avoid them is to run and hide behind cover. The Pillars are the best ones for this.

Shoot Through Gaps on Floor

The easiest way to deal damage to Wotan in this phase is by shooting at the gaps on the floor. They're wide enough so you can shoot through them from both close and long-range.

Use Shock then Corrosive Weapons

Bring down Wotan's shields faster by using shock weapons then as soon as the shields are down, switch to a corrosive weapon! Focus on bringing down the shield first to create an opening for your team

Weak Point at its Back

When the shields are down, you'll be able to shoot at Wotan's weak point at its back. It's a small glowing box.

Starting this phase, Wotan will be behind shields that constantly rotates. It has a vertical opening that you can shoot through. Once it's brought down, Wotan will start to jump around the arena.

Wotan will summon Valkyries right as it puts up its shield. With the amount it summons, leaving them alone will easily bring you down. Take care of at least a few of them before focusing on Wotan.

Run Next to Vertical Opening to Shoot Wotan

It;s much more efficient to run next to the vertical opening in Wotan's shields rather than being stationary and waiting for it. Shoot as you run along it. You can also slide to catch up to its speed.

Longbow Grenades Do Not Pass Shields

You'll need to throw or aim at shield openings when it comes to grenades, even if it is a longbow. It will not pass through the shields!

This is the Final Phase where Wotan will hide behind its shields. It will have 2 shields around it so you'll need to take down 2 bars of shields before it can be exposed.

Outer Shield can be Passed Through

You can go inside Wotan's outer shields without taking any damage. From here you can take shots at it from the vertical opening in its inner shield,

Inner Shield will Have Smaller Opening when Outer Breaks

When you break the outer shield, the opening in the inner shield will become smaller. The only opening will be at the very top of the shield.

Use Pillars to Get Upper Ground

There are Pillars you can jump up to get the high ground. From there, you can shoot at it from the top of its shields.

When the Outer Shield is gone, Kraken and Thor robots will come out. They're tough functioning similar to Wotan so make sure to bring them down quickly with your corrosive weapons.

Wotan the Invincible splits into 2 in the final phase of the fight. You'll need to take down both of his upper and lower bodies to complete the takedown.

Although the lower body is more mobile, the Wotan's upper body is more dangerous since it'll fly off and fire lasers to you and your allies. Focus on taking that down first before anything else.

Unlike the upper body, the Wotan's lower body comes with a shield that you'll need to take down before you can deal damage to it. Remember to use a shock weapon for this!

Wotan will keep throwing rockets at you throughout the final phase. Stay on the move at all times. Remember to check the ground for markers on where the rockets will hit.

Keep an Eye on Wotan's Position

Wotan's more agile during this phase. Keep an eye on it to know its position at all times to see where the rockets will come from and where you should shoot.

When Wotan's body jumps around, it will set off energy orbs similar to Troy Calypso during his boss fight. You can easily avoid this by going between the orbs if you're far enough.

What are Raid Bosses?

Toughest Enemies Introduced in the Series

Raid Bosses are a staple of the Borderlands series having appeared in all of the franchise's games. They are all extremely dangerous with high health and damage.

For how hard they are, bringing Raid Bosses down is worth it for their rewards. Previous games included exclusive powerful Legendary weapons and even currency to buy higher tier weapons and equipment!

Thank you its tough