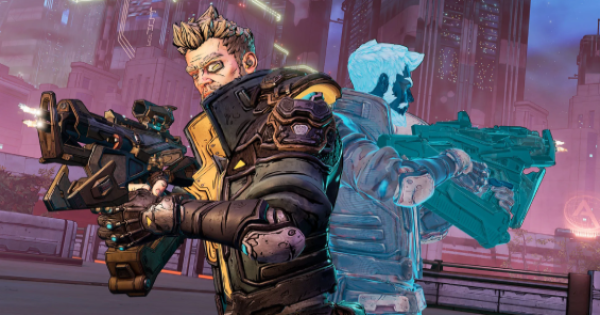 Learn all you need to know about Zane the Operative's skill tree in Borderlands 3! Featuring all Action Skills, Augments, notable Skills from each tree, all skill list and more!!!

A member of the notorious Flynt family, Zane is a semi-retired corporate hitman who uses his trickery and gadgets to get the upper hand in battle. Zane's arsenal is composed of a SNTNL drone, a Barrier Shield, & a Digi-Clone!

Versatile Skills To Adapt To Any Situation

Zane's skills allow him to be versatile and adaptable when in combat. He charge into the heat of battle with his drone, drop his barrier to hold his ground, or even deploy his Digi-Clone to draw the enemy's attention.

Zane is the only Vault Hunter that can equip two action skills at a time. This allows him to control the tide of battle on the fly. He can mix & match his skills for maximum DPS, or even create a balance between damage and sustain!

Increases gun damage whenever an action skill is up. If both action skills are up, it will give Zane a huge increase in gun damage.

A great way to quickly jumpstart your shield recharge if you ever run out of shields during a fight!

Allows you to instantly gain a Second Wind if you ever go down in a fight, allowing you to fight for much longer.

Will increase the Digi-Clone's Gun Damage, Max Health, Fire Rate, Reload Speed, and Digi-Clone Duration at the expense of your grenades. Will make your clone as strong as it can be!

The Digi-Clone will be able to distract enemies while Zane can focus on flanking, looting or even healing. It's a great way to keep enemies pre-occupied while giving you some breathing room!

Will allow you to increase the duration of all of your Kill Skills. Most of the skills in this tree are Kill Skills. Perfect for players aiming to spend most of their skill points into this tree.

Killing enemies temporarily gives your currently equipped weapon lifesteal. This is perfect for sustain when going against tougher enemies. Best used on hordes of low tier enemies to keep the skill active!

These skills go hand-in-hand with each other as increasing your movement speed after scoring a kill will in turn increase your gun damage!

With the SNTNL Drone, you will be able to have another source of damage against enemies. The SNTNL Drone lets you whittle down the health of multiple enemies!

Notable Skills In Under Cover Tree

This skill makes you resistant to the damage type you are receiving. This allows you to soak up more damage against enemies and stay in the fight for longer.

A skill that will increase gun damage based on how much shield you have. This gives you an upper advantage when starting out fast, letting you hit the enemies much harder and kill them quicker!

This skill lowers a status effect's duration on Zane, protecting him from most of the negative effects during fights. The latter skill will also increase your resistance to non-elemental damage, making you more sturdy in combat!

Spawn a Digi-Clone of Zane. This Clone stays in place, but distracts and fires at enemies.

Pressing F or G while the Clone is active causes Zane and the Clone to swap places.

Whenever one or more of Zane's action skills are active, he gains increased Gun Damage for each active action skill.

Whenever Zane swaps places with his Clone, a Cryo Nova is triggered around Zane and his Clone.

Kill Skill. Whenever Zane kills an enemy, he and his Digi-Clone receive increased Gun Damage and gain Health Regeneration for a few seconds.

The Digi-Clone throws a copy of Zane's current grenade mod when it is first activated. If the Digi-Clone is killed, it drops a free grenade.

Kill Skill. Killing an enemy while the Digi-Clone is active gives the Clone a chance to throw a grenade.

The first shot fired from Zane's gun has a chance to also fire a grenade. This skill has a short cooldown

Whenever the Clone takes damage, Zane's shield is restored by a portion of that damage.

Whenever Zane swaps places with his Clone, his shield immediately begins recharging.

Enemies are more likely to target the Clone for a few seconds after it’s summoned and after swapping places.

Hold down F or G to end the action skill early.

When Zane’s Clone is ended, the Clone explodes, dealing Splash Damage to all nearby enemies.

The more Clone time remaining, the greater the damage.

Press F or G during Fight for Your Life if Digi-Clone is active to destroy the clone and immediately gain a Second Wind with full health.

Whenever one or more of Zane's Action Skills are active, he gains increased Movement Speed for each active Action Skills.

If Zane takes health damage while the Clone is active, a portion of that damage is shared to his Clone instead.

Zane and his Digi-Clone gain a chance to ignore bullets. This chance is increased for a few seconds after activating an Action Skill. This effect stacks.

Whenever Zane summons his Digi-Clone, it consumes up to 3 grenades. For every grenade consumed, the Digi-Clone gains increased Gun Damage, Max Health, Fire Rate, Reload Speed, and Digi-Clone Duration.

Trick Of The Light

The Clone is equipped with a copy of Zane's Current Weapon when activated.

Swapping places with the Clone causes Zane and his clone to gain increased Gun Damage.

Send into battle an automated SNTNL drone that continually flies through the environment and attacks enemies with its Machine Guns.

Pressing F or G while SNTNL is active causes it to attack the enemy under Zane's crosshairs, if any.

Zane's Gun Damage is increased while moving. The quicker he moves, the greater the Gun Damage bonus.

Kill Skill. After killing an enemy, Zane's Reload Speed is increased for a few seconds.

SNTNL will occasionally drop a free grenade based on Zane's current grenade mod while attacking enemies.

SNTNL occasionally shoots out a beam of Radiation that weakens enemies and buffs Zane.

For every weakened enemy, Zane’s Movement Speed and Fire Rate are increased.

All of Zane's Kill Skills gain increased effect and duration.

SNTNL emits a static field that sends a Shock Beam to nearby enemies, draining their shields and replenishing Zane’s.

SNTNL adds a rocket pod to its primary weapons, allowing it to shoot rockets as well as machine guns.

Kill Skill. After killing an enemy, Zane’s next five shots all have a chance to fire an additional projectile.

Hold down F or G while SNTNL is deployed to paint a target area.

SNTNL fires a missile barrage at that area, and if an enemy is killed, SNTNL's duration is reset.

This can only be used once per Action Skill use.

All Under Cover Tree Skills & Effect

Drop a deployable Barrier that blocks incoming projectiles. Zane and his allies can shoot through the Barrier, dealing increased Gun Damage.

Pressing F or G while Barrier is active picks up and holds the Barrier, but the size and bonuses are decreased.

Zane gains increased Action Skill Cooldown Rate. This bonus is based on the amount of shields he has. The more percent full, the greater the bonus.

Whenever Zane or an ally touches the Barrier, they gain increased Movement Speed and Reload Speed for a few seconds.

Whenever Zane scores a Critical Hit on an enemy, there's a chance they will be Slowed. This effect stacks until the target is Frozen.

Whenever Zane is damaged, he gains Damage Resistance against that damage type.

Rise to the Occasion

Zane gains Health Regeneration. The lower his shield is, the higher the bonus.

Nanites Or Some Shite

Zane and his allies gain Health Regeneration, increased Reload Speed, and greatly improved Shield Recharge Delay while near his Barrier.

The lower his health, the more health is regenerated.

While Zane's shields are active, he gains increased Gun Damage and Accuracy. This bonus is based on the amount of shields he has. The more percent full, the greater the bonus.

Kill Skill. Whenever Zane kills an enemy, they create a Cryo Nova, dealing damage to all nearby enemies. This skill has a short cooldown.

Enemies that touch the Barrier take Shock Damage and are staggered.

Whenever Zane damages a frozen enemy with his weapon, he gains some of that damage back as health.

Whenever Zane Freezes an enemy, his shield instantly begins recharging.

If Zane's shields are already full, he regenerates health for a few seconds.

If Zane's health is already full, his Action Skill Cooldowns and Durations are immediately reset.

Zane gains increasing Accuracy and Handling. The longer his shield is full, the greater the bonus.

Zane's Barrier gains the effects of his currently equipped Shield Mod. Additionally, shield effects are applied to all allies near the Barrier. Bonuses to Zane are reduced.